Catechizing Our Children: The Whys and Hows of Teaching the Shorter Catechism Today 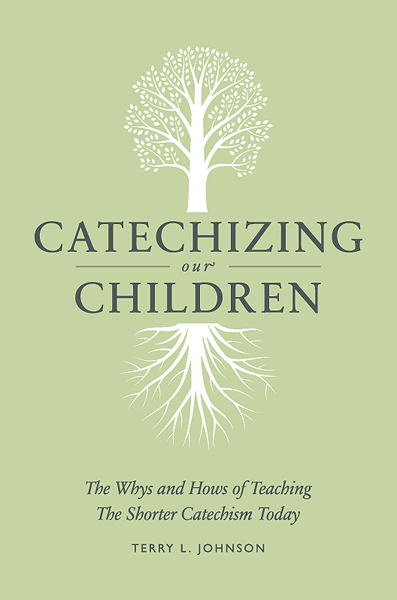 Catechizing Our Children: The Whys and Hows of Teaching the Shorter Catechism Today

Catechizing is often a missing ingredient in the discipleship of covenant children today. Many parents reject catechizing by pitting it against Bible memorization. Yet those making this objection fail to realize that the catechism is often the best tool to help us understand the Bible. Terry Johnson's Catechizing Our Children shows us the blessing of catechizing in promoting a vibrant biblical faith.

Johnson's book is persuasive and clear. The greatest strength of his approach is that he sets catechizing in the "environment" of personal holiness. He notes, "Without the daily domestic example of Christian lives being lived with integrity, we have little hope of catechetical usefulness" (p. 4). He then addresses the history of catechizing in Protestant churches and the peculiar strengths and advantages of the Westminster Shorter Catechism as a culmination of the best of Reformed theology and catechesis (chapters 2 and 3). His fourth chapter addresses the structure of the Shorter Catechism. Chapter 5 presents a suggested course of catechizing, followed by an appendix detailing how his congregation implements these suggestions.

Johnson recognizes that catechizing neither replaces Bible reading nor automatically secures the salvation of covenant children. But he rightly concludes, "Given our commitment to the well-ordered family, the well-ordered church, and prayer, we think that with catechizing we have the best method of indoctrinating our children, and the best hope of transmitting our faith to our children" (p. 72).

Johnson's book has minor deficiencies, many of which are historical. He states that the Shorter Catechism "was not suitable for younger children" (p. 11) and that Puritans, such as Thomas Vincent, recognized this by writing commentaries on the catechism. However, this contradicts both the original preface to the catechism and the preface to Vincent's commentary, which notes that while the younger children in his congregation memorized the Shorter Catechism, the older children memorized his commentary on it. Johnson also makes the common mistake of elevating Calvin to demigod-like status by acting as though he almost single-handedly developed doctrines such as Christ's threefold office, the Reformed doctrine of the Spirit (p. 34), and the Lord's Supper (p. 59). This neglects both the medieval and the Reformed precedents for such teachings. Yet these and a few other deficiencies do not detract from the overarching purpose of his work.

A good catechism, such as the Shorter Catechism, gives one the categories needed to understand the Bible properly. Catechizing Our Children speaks to the need of the hour. Take the couple of hours needed to read this book and you may reap rewards for a lifetime.