The Theology of the French Reformed Churches: From Henri IV to the Revocation of the Edict of Nantes 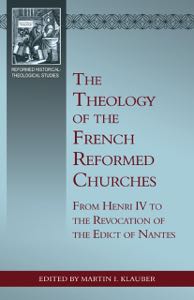 The Theology of the French Reformed Churches: From Henri IV to the Revocation of the Edict of Nantes

Even Francophiles like me often suppose that French Reformed pastors, past and present, have little if anything to offer to Reformed theological reflection. How refreshing it is to read a collection of essays that place French-speaking theologians in the historical spotlight.

In this eleventh volume of the series Reformed Historical-Theological Studies, Martin I. Klauber has gathered together a variety of stimulating articles in an attempt to resurrect some of the vitality and richness of seventeenth-century French Reformed theology. "The period was an unusual one," notes Klauber, "in which France boasted two state religions, Roman Catholic and Protestant, due to the protections afforded the latter by the Edict of Nantes" (p. 1).

The historical background of this nearly century-long period is explored in the first part of the book, while the second part develops various, and even opposing, streams of Reformed theology and their theologians. The reader will find helpful appendixes providing excerpts of the Edict of Nantes (1598) and Edict of Fontainbleau (1685), revoking the freedom of Protestants in France, as well as a list of contributors, many of whom will be unknown to readers unfamiliar with French Reformed historical research. The selected biography of primary and secondary sources will permit the English reader to further his research. While the primary sources include many French titles that have not been translated into English, it would have been helpful to include the French bibliographical information of works already translated into English.

Anyone at all familiar with the seventeenth-century French Reformed Church will likely recall the theological controversies surrounding Amyraldianism and the persecution of the Huguenots. This collection of articles gives a fuller picture of the historical, theological, ecclesiastical, and even personal issues involved.

For instance, while the hypothetical universalism espoused by Moïse Amyraut is often condemned as heretical, Richard Muller demonstrates that his views were controversial, and even vigorously opposed by his Reformed colleagues, but never condemned by the Reformed Church synod (pp. 197–216). Amyraut also made significant contributions to the apologetics of faith and science, as well as Christian morality.

With respect to the Huguenot persecution, several articles add personal touches to the often dry perception of the men of God who pastored churches during these years. On the one hand, many pastors like Andreas Rivetus had vivid memories of the bloody persecution and other dramatic events affecting the Huguenots, which "profoundly colored his identify and personality" (p. 254) as he sought the unity and peace of the church. Other pastors, such as Pierre Jurieu, who fled the increasing persecution just before the revocation of the Edict of Nantes in 1685, wrote a much-read treatise on Christian devotion "in the heart and closet—in places where the gaze of the king could not find it" (p. 346).

Pastors and teachers would benefit richly from reading even a selection of these articles. The discovery of Reformed theology put into practice in an unfamiliar historical context may open up new perspectives on how to teach and live the Reformed faith today.