The Works of John Knox 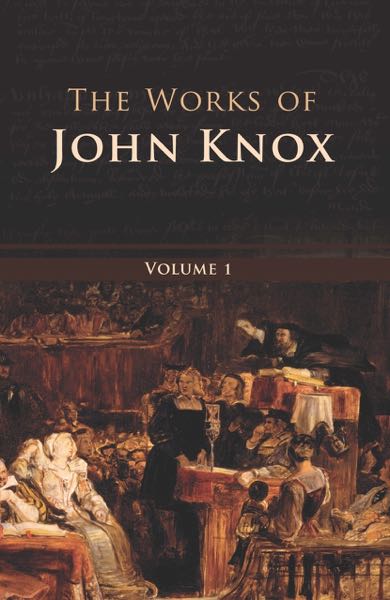 The Works of John Knox

We"ve been celebrating, at least since 2009, various anniversaries related to the Protestant Reformation. We noted last year, in these pages, the five hundredth anniversary of the birth of John Knox, the father of Scottish Presbyterianism. Knox was no Luther or Calvin, but he neither feared man nor lacked zeal, and God was pleased to use him to accomplish extraordinary things.

Knox was indomitable, manifesting his zeal in actions like throwing an idol of Mary overboard and saying, “Let her swim”; confronting Mary, Queen of Scots; and, near the end of his life, rebuking the visiting French ambassador from the pulpit after the Saint Bartholomew"s Day Massacre with “Your king is a murderer.” Knox took up the Protestant cause in Scotland in the 1540s, defended justification by faith alone and attacked Roman Catholic idolatry, and served as a French galley slave, English Reformer, pupil of Calvin in Geneva, and Scottish Reformer.

As a part of this quincentennial celebration, the Banner of Truth Trust has republished The Works of John Knox in six sturdy, clothbound volumes. These volumes, which have not been available in hardback for many years, are a reprinting of Knox"s writings as collected and edited by David Laing in the nineteenth century. This reviewer believes that a competent, scholarly modernizing and editing of Knox"s Works (as Kevin Reed did in his mid-nineties Selected Writings of Knox) would be most welcome.

Volumes 1 and 2 contain the five books of Knox"s History of the Reformation in Scotland, certainly his principal work (though the authorship of the fifth book is disputed). One will have to slog one"s way through all the peculiar spelling and grammatical conventions of the time, but it remains valuable to read one of the Reformers who participated in the events and see how he viewed this work of reformation as a work of the Holy Spirit among his people.

It has often been noted, and these writings show, that Knox was no systematic theologian. Rather, he was a man of action: a preacher and a churchman, contributing in 1560 both to the Scots Confession and the First Book of Discipline. Volumes 3–5 show that much of what Knox wrote were letters and treatises dealing with the issues of his day—not only defending the Protestant faith (doctrine, government, discipline, and liturgy), but also setting forth his vision of a godly commonwealth. He does have, in volume 5, a very comforting treatise on predestination, but little else that is more purely doctrinal. Volume 6 contains a large number of letters and prayers, in addition to an account of his life.

Little love is lost on Knox these days in the Church of Scotland (his grave lies under a parking lot), but even in the areas of disagreement that we might have with him, there is much to learn from this Scottish giant of the Reformation, who, on his return to Scotland in 1559, prayed, “Give me Scotland, or I die!”