The Message of Jeremiah 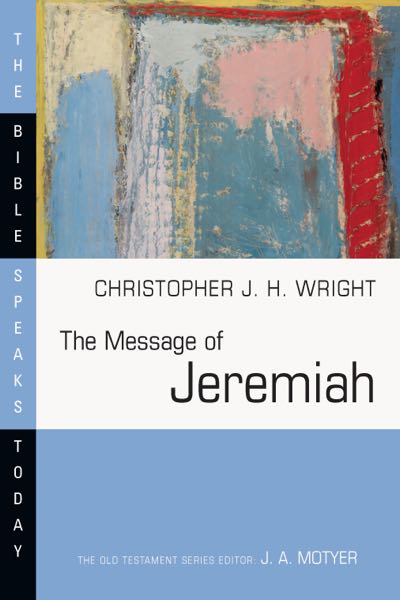 The Message of Jeremiah

Many Christians have scratched their heads at the book of Jeremiah. Into this confusion, Chris Wright’s new book expounds Jeremiah with accuracy and clarity, relating it at every turn to contemporary life. Following a short introduction, Wright explains the book passage-by-passage in considerable detail.

Wright is a British evangelical, and his conclusions comport with a conservative Christian worldview. He writes for a nontechnical audience, with scant citations and only oblique references to the original language. He approaches the book by imagining what it would be like to be the original audience in order to explain the text and make straightforward applications to today. Along the way, he is consistently aware of theological issues that may trouble Christians: How do we deal with God’s intense anger in Jeremiah? Was it right for Jeremiah to pray his angry prayers of cursing against his enemies (e.g., in 18:19–23)? And so on.

Wright has a knack for memorable turns of phrase. Regarding Judah’s worship of Baal and Asherah, he says, “The cult of fertility was a cult of futility, in which there was neither substance nor salvation” (p. 64). In discussing the horrible judgment of exile, Wright says, “The book of Jeremiah, in its profound anticipation and explanation of the exile, is not Jeremiah’s gloating ‘I told you so’, but rather his tear-filled, ‘I told you why‘  ” (p. 47).

Notwithstanding Jeremiah’s intense, pathos-filled oracles of judgment, Wright shows how God’s plan in the book ends in salvation, a salvation that ultimately comes in Jesus Christ.

Wright gives a fresh read to Jeremiah that is both reliable and upright. His long-standing passion for missions and social justice shines through on every page (Wright is the international ministries director of the Langham Partnership).

However, Wright’s concern for biblical morality crowds out the more central theme of grace in Jeremiah. The “theological and expository reflections” at the end of each chapter are largely moral applications and almost never mention the completed work of Christ (although Wright does draw some connections to Christ in discussing the new covenant in 31:31–34). The Christ-centered, redemptive-historical interpreter will have to do his own legwork in order to preach Jeremiah, since Wright only rarely shows how Jeremiah fits into the larger narrative of redemptive history, and will sometimes confuse passages that are specially connected with the exile (e.g., the closing down of hope in 14:1–15:9) with our situation today, as though God would ever abandon his people after Christ.

Also, one sometimes feels that Wright fails to capture the intensity and profundity of this amazing book. The untamed prophet does not roar with ear-splitting power from Wright’s pages. Deep reflections on Jeremiah’s theological underpinnings (e.g., that judgment must precede a new beginning) are sometimes lost in the details.

Nevertheless, faithful and clear interpretations of Jeremiah are rare in our day, and Wright is to be commended for his contribution.