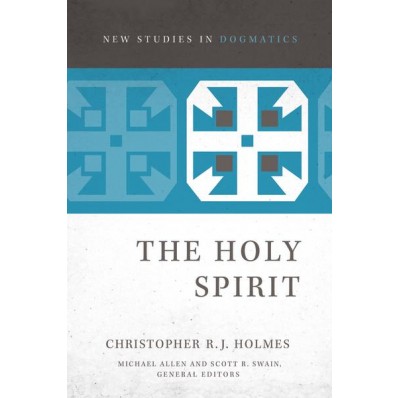 Zondervan’s New Studies in Dogmatics aims to retrieve classic expressions of Christian theology and incorporate it in contemporary discussions (p. 15). Christopher Holmes’s work on the Holy Spirit is the first contribution to this series. He seeks to establish the being, identity, and activity of the third person of the Trinity (p. 19). His treatment is effective and helpful in many respects, but it also reveals some shifts in recent theology.

The Holy Spirit is an intriguing analysis and synthesis of three of the most significant teachers in church history. The author’s emphasis is primarily on the identity of the Spirit in relation to the Father and the Son. After introducing his doctrine in general, Holmes gleans insights from Augustine, Aquinas, and Barth. This choice of authors enables Holmes to treat the doctrine of the Spirit in relation to three very different theologians from three dramatically differing contexts: ancient, medieval, and modern theology. The disadvantages of this approach are that Reformed contributions to the doctrine of the Spirit are ignored and that a unified doctrinal presentation may be lost. Each section traces the doctrine of the Spirit from the exegetical labors of each figure in the gospel of John and then in light of their doctrinal treatises. Holmes reminds his readers that who the Spirit is in relation to the Father and the Son determines how he works in the world and in believers. In doing so, he also demonstrates that contemplating the glory of the triune God and placing worship at the heart of the Christian faith should be the highest priorities of every believer.

There are telling omissions in Holmes’s work, however. While his analysis of Augustine, Aquinas, and Barth is learned and penetrating, he includes very little exposition of Scripture beyond his analysis of the work of these men on the gospel of John. Coupled with a lack of familiar theological terms and his use of Barth-like vague expressions, the virtual absence of references to Reformed authors in this volume is conspicuous. Thus, while Holmes directs his readers to seek edification through contemplating the glory of the triune God and worshipping him, it seems likely that few will be edified beyond a narrow scholarly audience. This is ironic, particularly since Holmes argues vigorously that God has revealed theology for the edification of the church. Some of the analyses, particularly the synthesis of Barth and Aquinas, will be difficult even for some academics to follow.

Holmes’s treatment of the Holy Spirit puts a finger on some significant needs in the church today. The church needs to engage critically and constructively with prominent figures in Christian history. The church needs to retrieve older models of theological reflection as well. Yet the church needs the voice of Reformed theology in this conversation, and she needs to bridge the gaps between the academic theologian, the pastor, and the people in the pews.

This series should prove interesting, but it remains to be seen how well it will suit the needs of Christian theology and the church at large.