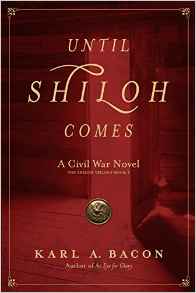 “Once you have begun to read Until Shiloh Comes, you won’t be able to put it down.” So reads a promotional piece for this book, and I can attest that it was true for me. In fact, I read it twice, and enjoyed and appreciated it even more the second time. This is a well-written story set in western Tennessee in the aftermath of the Civil War Battle of Shiloh.

It begins with two boys wounded in the battle—one a Confederate and one a Yankee. Davina Matthews, the mother of the Confederate soldier, and one of her family’s slaves come looking for her son as the first day of the battle draws to a close. Through Stanley Mitchell, a severely wounded Yankee, she finds her son. Reluctantly, Mrs. Matthews takes Stanley to her home, too. Despite the outrage of the other children in the family and the anger of the community, she nurses him back to health. No one could have anticipated what would come of his presence in the home.

As the story unfolds, we see a clash of cultures: North versus South, Christian versus non-Christian, free versus slave. It is filled with grit, determination, kindness, love, self-sacrifice, romance, Christian virtue, simmering hatred, and several surprises along the way. Even those who do not have a particular interest in the Civil War will enjoy the story.

This is Karl’s second novel. I believe that he developed further as a writer between his first and second novels. His characters in Until Shiloh Comes are well developed. Each major character comes across as a real person with a distinct personality. The dialogue is also richer and fuller than in his first novel.

This book is suitable for middle schoolers and high schoolers, as well as adults. It could fit into a homeschool curriculum in either history or social studies.

Karl serves as a ruling elder at Westminster OPC in Hamden, Connecticut. Since his youth, he has been a serious student of the Civil War. Detailed research, extensive reading, and visits to the sites referred to in each book lie behind his writing.

Until Shiloh Comes: A Civil War Novel is Book 1 in The Shiloh Trilogy. Once you have finished Book 1, you don’t have to wait for Book 2. Prairie Dog Town was released in late August 2016.