A Sad Departure: Why We Could Not Stay in the Church of Scotland 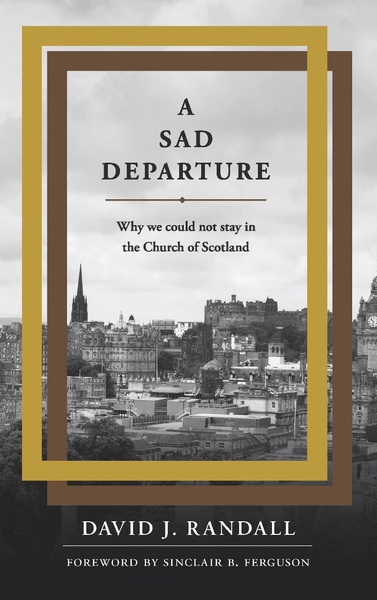 A Sad Departure: Why We Could Not Stay in the Church of Scotland

A Sad Departure: Why We Could Not Stay in the Church of Scotland, by David J. Randall. Banner of Truth, 2015. Paperback, 216 pages, list price $15.00. Reviewed by OP pastor Iain Wright.

The title of this volume contains a deliberate ambiguity. Either reading is a massive understatement. For those men who have labored to preach the gospel in the established church, in some instances for upwards of four decades, the departure is beyond sad; it is a heart-breaking personal catastrophe. Hardly less disastrous has been the departure of the church from anything even close to biblical orthodoxy. The recent vote in the General Assembly of the Church of Scotland to permit men and women in same-sex marriages to enter and continue in ministry is but the latest bitter fruit harvested from a wholesale rejection of God’s Word.

The author, David Randall, has ably traced the decline over gender issues that has led to so many quitting the Kirk. In an appendix, their names are recorded on what amounts to a war memorial for those whose ministries were cut short in the Kirk, sacrificed on the altar of political correctness. As the reader reviews the history, there starts to emerge a seeming inevitability of the final outcome. Humanly speaking, the contest was unequal from the beginning. The denomination has long been in the hands of those espousing liberal theology. Evangelicals have been little more than tolerated. Randall shows the price that is now being paid by those who love the Kirk, but now find themselves on the outside.

There is, however, another aspect of the situation which is only lightly touched upon. A distinction is drawn between the struggle some years ago over the ordination of women and the recent struggle over same-sex marriage. The former permits of legitimate disagreement among those who hold a high view of Scripture, whereas the latter does not—or so it would appear. Though this is indeed open to debate, it does not accurately reflect the situation among evangelicals in the Church of Scotland. Evangelicals yielded to pragmatism as part of the “softly, softly” approach of the Crieff Brotherhood. At a meeting of the Brotherhood in the 1980s, Ian Hamilton set out with great clarity the scriptural reasons for rejecting the ordination of women. Equal time was given to Jerry Middleton, who agreed with Hamilton’s interpretation of Scripture, but offered pragmatic reasons why evangelical ministers should participate in ordaining women to the eldership and ministry. William Still called at least one minister and urged him to go against his conscience to ordain a woman, but offered no biblical rationale.

The weakness of the book is that it does not adequately deal with decisions of the leadership in the evangelical community and its failed policy of “infiltration.” Nor does it ask the hard question: to what extent might the outcome have been changed by a resolute commitment to the whole counsel of God thirty years ago? The roots of the present disaster run further back than Randall allows.