The Person of Jesus: Radio Addresses on the Deity of the Savior 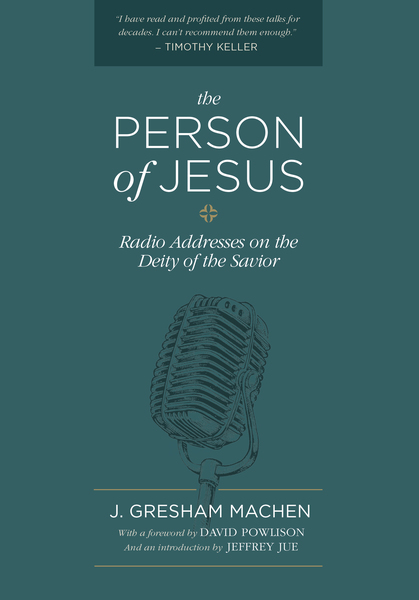 The Person of Jesus: Radio Addresses on the Deity of the Savior

Because of the continued attacks on Christianity in our day, J. Gresham Machen’s writings are as relevant as ever. This is why the Church owes Westminster Theological Seminary a debt of gratitude for its publication The Person of Jesus: Radio Addresses on the Deity of the Savior. Consisting of seven transcribed radio addresses given by Machen in the 1930s, this short book offers a succinct defense of the person and deity of Jesus Christ. This material previously appeared in The Christian Faith in the Modern World (Eerdmans, 1947); Westminster has made some adjustments to enhance readability.

As is typical of Machen, he fearlessly takes on his opponents and exhorts Christians to stand firm: “Every true man is resentful of slanders against a human friend. Should we not be grieved ten times more by slanders against our God?” (4).

Machen begins by defending the Trinity, and shows how God, through the inspired Scriptures, “allowed us sinful creatures a look into the very depths of the being of God” (14). In the next two chapters, Machen defines and defends the deity of Christ, pointing out the folly of man in denying this critical doctrine: “It means that he has worshiped and served the creature rather than the Creator, and that is a sin indeed” (26).

Machen then turns to the Sermon on the Mount. Here he notes the irony of many liberals who, while denying that Christ is God, nonetheless profess their love of this sermon. Do they not see, Machen wonders aloud with his readers, how Christ so clearly states his divine authority? Do they not recognize that only one of his stature could recount, “You have heard that it was said …” about some aspect of God’s law, and respond with, “But I say to you …”?

Next, Machen considers Christ’s miracles and resurrection. He discusses how critics have sought to dismantle these supernatural events while holding on to a more “historical” Jesus. But, as Machen notes, if you were to free Jesus from all the miracles in Scripture, he “would not be worth believing” (75), because he would be just another man.

Lastly, he turns to the resurrection, and demonstrates why it matters:

Throughout these radio addresses, Machen’s arguments are both clear and profound. This makes The Person of Jesus a very helpful little book for both new and mature Christians in defending the Christ of the Scriptures.