The Miracles of Jesus: How the Savior’s Mighty Acts Serve as Signs of Redemption 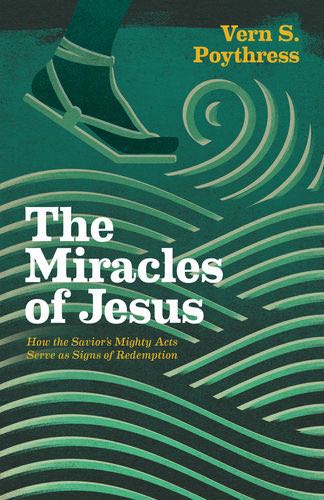 The Miracles of Jesus: How the Savior’s Mighty Acts Serve as Signs of Redemption

This is Vern Poythress’s thesis in The Miracles of Jesus. Each miracle “functions as a small picture of Christ’s glory and of his mission of salvation. The miracles tell stories that show analogues to the grand story of redemption.… The small stories of redemption point especially to the climax of redemption in Christ’s crucifixion, death, resurrection, ascension, reign, and second coming” (29).

Poythress covers the seven miracles recorded in the gospel of John. Each one points forward “to the great miracle of Christ’s resurrection” (46)—even his turning water into wine and his walking on water. Each miracle involves movement from trouble to resolution, which anticipates the movement from death to resurrection. This movement is further “organically related to the movement from a broken to a restored and harmonious endpoint in every sphere of life” (51).

Once the connection between a particular miracle and the resurrection of Jesus is discovered, the Christian may proceed to apply the text to himself, but only in light of his union with Christ and his own experience of death and resurrection. The miracle narratives do not apply to us directly, but to Jesus first and then to us by virtue of our union with him. Poythress shows how the triangle diagram developed by Edmund Clowney “to summarize how to go about interpreting types in the Old Testament” may also be applied to the miracles of Jesus (65).

No less than twenty-eight chapters of the book are dedicated to the miracles recorded in Matthew’s gospel. They could have been reduced to less than twenty. He has five separate chapters, for example, entitled “Many Healings,” which cover five different summary passages of Jesus healing the multitudes. It would have been better to combine these texts and similar miracle narratives instead of having a separate chapter for each one, which makes the book repetitive.

I have three main criticisms of the book. First, most of the material on how to draw applications from the miracles is geared toward the individual Christian rather than the church. Second, I am a bit uncomfortable with the parallel the author frequently makes between physical healing and spiritual healing. It would have been better to use an eschatological dualism (already/not yet) rather than an anthropological dualism (body/soul) in making applications. Finally, the sacraments are barely mentioned in the book, even though some of the miracles of Jesus are linked to the sacraments and contribute significantly to the sacramental theology of the church.

Overall, this book is an excellent contribution to biblical scholarship, and I highly commend it to anyone interested in understanding the meaning and relevance of the miracles of Jesus.