Death in Adam, Life in Christ: The Doctrine of Imputation 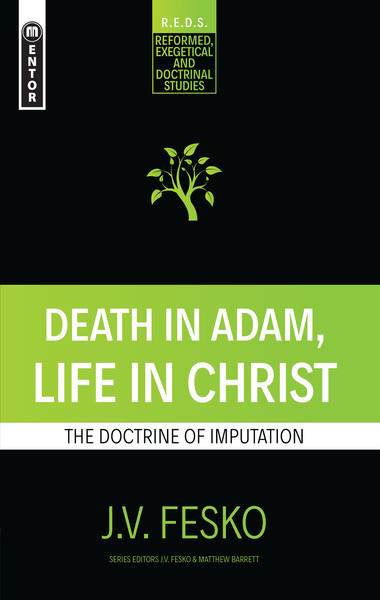 Death in Adam, Life in Christ: The Doctrine of Imputation

Contemporary evangelicals sometimes complain that the modern church has abandoned older, purer doctrine—and there’s no doubt that this has happened. But in the broad sweep of church history, it’s also common for theology to move gradually toward orthodoxy—and nowhere is this more apparent than in the oft-neglected doctrine of imputation.

J. V. Fesko’s Death in Adam, Life in Christ recounts this struggle with meticulous care. It’s fascinating to watch church fathers work haltingly toward an accurate understanding of how Adam’s sin is imputed to humanity—and how our sin is imputed to Christ, while his righteousness is then ascribed to us.

This helpful historical survey is only one of many merits of Fesko’s excellent new volume.

Chief among its other virtues is extraordinary clarity on a topic that can be challengingly recondite—and which in any case has not been widely taught. When was the last time you heard a sermon on imputation? If your answer is something like “never,” this book will provide much-needed illumination.

Fesko calls attention to strong work by such lesser-known theologians as Francis Turretin, Martin Chemnitz, Robert Rollock, and Ambrogio Catharinus. And he grapples with our culture’s rampant individualism, which makes the imputation of Adam’s sin so counterintuitive. Modern thinkers may feel it’s unfair for God to impute someone else’s crime to us, yet Fesko shows that such an action is quite common in Scripture. In Joshua 7, for example, Achan’s sin is ascribed to Israel; in 2 Samuel 24, punishment for David’s wicked census is poured out on the entire nation. Even more significant is Isaiah 53:4–6, where the Suffering Servant bears the sins of God’s people—an idea Fesko ties convincingly to the scapegoat in Leviticus 16. Furthermore, he repeatedly shows how the ascription of Adam’s sin to us has its corollary in the imputation of our sin to Christ. And, of course, that also applies to the placing of Christ’s righteousness upon us, a truth that has always been sadly underemphasized; yet, for Christians struggling to believe that God loves them, this key teaching is absolutely crucial.

Fesko treats these three imputations as a package deal, and in the process he underscores the necessity of a historical Adam as a parallel with a historical redeemer. As the author so pointedly asks, how can God impute to us the nonexistent sin of someone who never actually lived?

On the downside, the book is sometimes repetitive, occasionally bogging down in picayune detail and unwieldy vocabulary (e.g., noetic, repristinate, traducianism).

But these are quibbles. As Fesko himself concludes, “The doctrine of imputation is of vital importance for a right and robust understanding of the doctrine of justification and ultimately the gospel.” His book proves this clearly and firmly; and in doing so it points away from human effort and failure to mankind’s only true hope: the righteous death and life of our Savior, Jesus Christ.