The Majesty on High: Introduction to the Kingdom of God in the New Testament 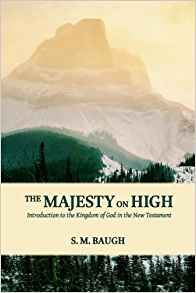 The Majesty on High: Introduction to the Kingdom of God in the New Testament

The Majesty on High: Introduction to the Kingdom of God in the New Testament, by S. M. Baugh. Create Space, 2017. Paperback, 168 pages, $12.95 (Amazon). Reviewed by OP pastor Jonathan Moersch.

Reading the Gospels, one comes away with the clear impression that Jesus spoke at length concerning the kingdom of God (occurring over one hundred times). But what exactly is the kingdom? A topic of such magnitude is difficult to define in a succinct, yet comprehensive manner. After many years of study and reflection on the topic, Dr. Steven Baugh offers this very simple definition of the kingdom: it’s the New Creation.

This definition of the kingdom helps to correct the misunderstanding that amillennialists “spiritualize” the nature of the kingdom, reducing it merely to the moral reign of God in the hearts of the elect. On the contrary, understanding the kingdom to be nothing less than the new heavens and new earth—which the New Testament repeatedly affirms is more lasting, permanent, and unshakable than things seen on earth (2 Cor. 4:18; Heb. 11:10, 12:28)—offers the most concrete, tangible kingdom imaginable. And yet the amazing news of the gospel is that this kingdom of God is at hand (Matt. 4:17)! As Baugh points out, Christ has truly inaugurated the kingdom of God at his first coming, but we await the full consummation of it at his second coming.

As the subtitle implies, this book is merely an introduction to the kingdom of God. While it does not address all aspects of the kingdom, it enables the reader to gain a solid foundation for future studies, such as the kingdom and the church, the kingdom in the world, and kingdom ethics.

In order to gain greater appreciation for how exactly the kingdom of God has been already inaugurated and how it will be finally consummated in the future, Baugh considers the following elements of the kingdom: the King, his kingly dominion, the realm, the subjects of the realm, and covenant as kingdom constitution.

Each chapter of the book is a careful study of a biblical passage that demonstrates these elements. These passages include Revelation 4 and 5, John 3, 1 Corinthians 15, and Matthew 5. For chapters 7 and 8 of the book, Baugh brings out several passages that explore the connection between the kingdom and covenant, namely, that a covenant establishes or legally constitutes a kingdom.

This book is written in a non-technical style, so one does not need to know Greek or theological jargon to benefit from it. That being said, it is not overly simplistic, and it does require careful reading. Although intended for the layperson, I suspect pastors and scholars alike will glean from these pages. Baugh brings his wealth of knowledge of Greek and of Greco-Roman culture to illumine the text of Scripture.

The Majesty on High is recommended for any who would like to gain a greater understanding of the kingdom of God and an appreciation for what it means to be a citizen of it.