The Vanishing American Adult: Our Coming of Age Crisis—and How to Rebuild a Culture of Self-Reliance 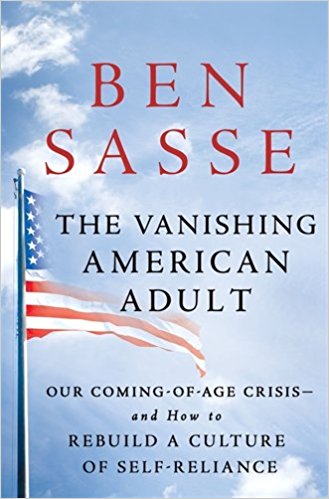 The Vanishing American Adult: Our Coming of Age Crisis—and How to Rebuild a Culture of Self-Reliance

Senator Ben Sasse (R-NE), husband and father of three as well as a committed Reformed Christian, has written a wonderful book. While serving as a college president before his election to public office three years ago, Mr. Sasse discovered that many students remained immature youths well into their twenties and beyond. He conceived this book to address the widespread problem, in the words of the volume’s subtitle, of Our Coming-of-Age Crisis—and How to Rebuild a Culture of Self-Reliance.

Along the way the senator treats such topics as the need to help our children resist peer pressure, learn the value and satisfaction of hard work, develop the habit of reading widely and critically, and get by with less stuff. The chapter on the benefits of travel and the discovery of unfamiliar places and cultures (as opposed to mere “tourism”) is alone worth the price of the book. (But that’s true of other chapters, too.)

Readers will quickly learn that Sasse doesn’t blame either American young people or their parents—as least not exclusively—for the mess we’re in. No, our current situation stems from a variety of widespread societal and cultural developments. Increasing national wealth and shifting attitudes toward child-rearing and the role of schooling contribute to an extended period of casual adolescence, including troublesome delays of marriage and moving out of Mom and Dad’s home.

The book is filled with engaging accounts of the author’s experiences while growing up as the son of a wrestling and football coach in a small Nebraska town, and the wisdom he and his wife, Melissa, have learned and practiced in the rearing of their own children. While the book is not a heavily religious or in-your-face Christian tract, the Sasses offer numerous specific and helpful suggestions for childhood reading and activities designed to produce independent, responsible, and mature young adults.

Senator Sasse doesn’t employ a useful phrase (see the next sentence) and barely hints at a major source of resistance to his analysis and prescriptions. The ancient Romans used the phrase “bread and circuses.” Members of the ruling class realized that assuring adequate food and entertainment (especially violent spectacles) was an effective way to keep common folk docile and content with their lot as subjects. Americans are in the process of perfecting this strategy. Many of our political, academic, and other leaders seem satisfied to guarantee that we all have plenty of cheap fast-food and drink, a smartphone, and endless supplies of popular entertainment as the surest road to maintaining public order and their own positions of power. The late social critic Neil Postman, occasionally referenced in Sasse’s book, warned us over thirty years ago of this danger in his classic volume Amusing Ourselves to Death.

Sasse’s book is highly recommended to the readers of New Horizons, especially to newlyweds and the parents of young children. You won’t be disappointed!