All That Is in God: Evangelical Theology and the Challenge of Classical Christian Theism 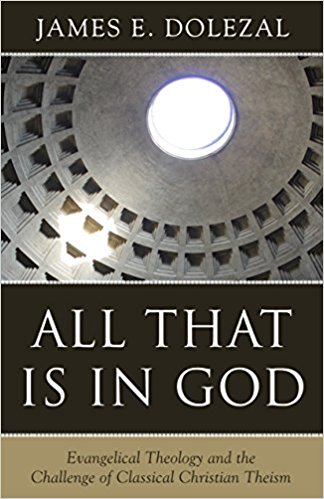 All That Is in God: Evangelical Theology and the Challenge of Classical Christian Theism

All That Is in God: Evangelical Theology and the Challenge of Classical Christian Theism, by James E. Dolezal. Reformation Heritage, 2017. Paperback, 176 pages, $10.00. Reviewed by OP minister Brian T. Wingard.

Dr. Dolezal has produced a book that takes one to the rarefied heights of philosophy and theology proper. To complete the statement from which the title comes, “All that is in God is God” (Anselm of Canterbury, 1300s). The subtitle indicates the author’s belief that this classical view of God, found in the Early Fathers, medieval theologians, the Reformers, and the Puritans, has been lost by much of contemporary evangelicalism, including Calvinists. At issue is the doctrine of God’s simplicity, i.e., that God is not a composite being of the sum of his constituent parts. The book may be considered a defense of the famous description of God as being “without body, parts, or passions” (WCF 2.1).

The opposing view Dolezal calls mutualism, which states that in order to be a true person, God’s relation to his rational creatures must be one of “give and take.” In one scholar’s words, God’s love must be “a vulnerable love that feels pain” (24). While the more radical forms of mutualism are found in process theology and open theism, Dolezal believes the greatest danger is with its milder forms, like that found in the writings of Bruce Ware, an avowed critic of open theism.

The book begins with an overview of models of theism, focusing mainly upon classical Christian theism and mutualism. From there Dolezal proceeds to focus on the doctrines of immutability, simplicity, eternity, and the Trinity, respectively, before giving his conclusion.

The focus on simplicity encompasses two chapters, one outlining the doctrine and a second detailing its contemporary loss. Dolezal states that the doctrine has been lost in one of three ways: by ignoring it, denying it, or distorting it. It may be surprising to some, as it was to me, to be reminded that Charles Hodge is among those who denied the classical understanding of the doctrine. These chapters contain what is, perhaps, the most controversial portion of the book. Dolezal insists that classical theism teaches that in God every attribute is identical. This has led many to object that power is not the same as wisdom or justice, or any of the other attributes. The author counters that the language of theology is not of attributes as they are known by God, but analogously as they are spoken of by human beings. Furthermore, Dolezal helpfully states, God is omnipotent simply by virtue of being God, and the same is true of all his other attributes. The concept of deity is not a genus of which the attributes are species, but God is simply God. A man, conversely, is not powerful by virtue of being human but by virtue of possessing a certain trait of “power.”

I recommend this volume to any pastor in the OPC who intends to teach in depth on the subject of theology proper. The book is not without its flaws, but they are in matters of omission, beyond the scope of this review.