Departing in Peace: Biblical Decision-Making at the End of Life 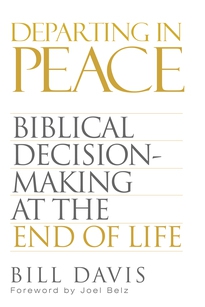 Departing in Peace: Biblical Decision-Making at the End of Life

Bioethical decisions about treatment and care at the end of life—concerning oneself or others—confront nearly all contemporary Christians. The process of dying has always raised important moral questions, but recent advances in medical technology and the complexity of the health-care system have made them exceedingly more complicated. Scripture doesn’t directly address many options we face. What are we to do? Bill Davis has offered an excellent resource on this issue for Reformed Christians.

Davis draws on his experience as a philosophy professor, PCA elder, and member of local hospital ethics committees. He devotes a long early chapter to foundational moral-theological ideas that guide the rest of the volume. The following chapters are theoretically substantive but have a practical focus. Davis reflects upon treatment decisions people face as death looms, the function and importance of advance directives, how financial responsibilities affect treatment choices, and how to navigate hospital culture. He helpfully utilizes concrete examples to illustrate the process of moral reasoning that leads to godly decisions. Along the way, he advises readers how to interact with people wisely and pastorally.

Davis’s primary audience is Christians inclined to think that being pro-life implies an obligation to try to extend life as long as medically possible, and hence to accept whatever treatment options accomplish this. Davis argues that being pro-life does not carry such implications. But he also warns readers tempted, in the other direction, to claim autonomous authority to choose life or death as they wish. In almost all cases, I believe Davis makes the right moral judgments. Many readers will undoubtedly disagree with some of them. Even in those cases, they will profit from Davis’s analyses of the important issues at stake.

I have only one critical concern. A large part of what Davis does is to help readers think through difficult end-of-life moral decisions that Scripture doesn’t address, and to do so wisely, in a way consistent with our theological commitments. This is good. But, Davis’s way of speaking frequently gives the impression that he’s a biblicist who expects Scripture to answer everything. Throughout the book, Davis writes of what “God’s Word permits,” what “God’s Word authorizes,” or what “God’s Word requires” (or of what’s “biblically permissible,” “biblically appropriate,” etc.).

In some cases, Scripture does what he says. In other cases, it really doesn’t. Consider a farmer who wants to carry out his vocation in a godly way. The question for him is not whether Scripture permits him to plant soybeans, or authorizes him to harvest in October, or permits him to sell his produce to China. God did not give Scripture to answer those questions. The farmer must exercise wise judgments about the climate, soil quality, government regulations, and market conditions. He is authorized to make such judgments as a divine image-bearer created to exercise dominion and to love God and neighbor. Farmers had such authorization long before Scripture existed.

A number of the “principles” Davis lays out require similar evaluation. For example, it’s not exactly true that “God’s Word authorizes spouses to speak … for each other.” That authorization comes from the nature of the marriage relationship as God created it; it existed long before Moses took up his pen.

Davis’s topic, end-of-life bioethics, exposes the problems of a biblicist mindset. I don’t think Davis really is a biblicist. In effect, he helps readers work through moral issues that Scripture doesn’t contemplate. But if he had used words such as “wisdom” and “prudence” much more often and phrases such as “God’s Word permits/authorizes” much less often, I believe he would have communicated more clearly.