The Ark of Safety: Is There Salvation Outside of the Church? 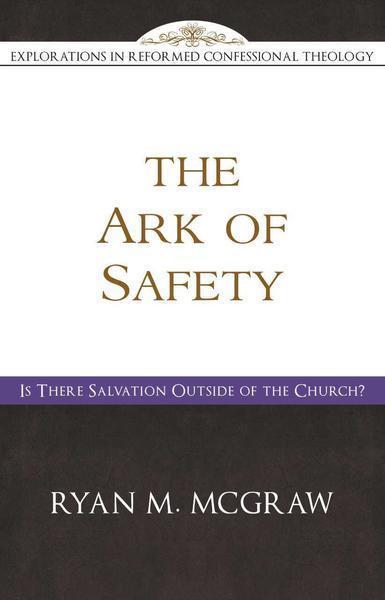 The Ark of Safety: Is There Salvation Outside of the Church?

Reviewed by: A. Craig Troxel

The Ark of Safety: Is There Salvation Outside of the Church? by Ryan M. McGraw. Reformation Heritage, 2018. Paperback, 112 pages, $7.50. Reviewed by OP pastor A. Craig Troxel.

In The Ark of Safety, Ryan McGraw’s primary quarry is the confessional phrase, “out of which [visible church] there is no ordinary possibility of salvation” (WCF 25.2). At first glance such a phrase may appear overly narrow or strict. Isn’t it enough simply to love Christ? On that point, Geddes MacGregor wrote that the quickest way of getting a correct answer to the “very theological question, ‘What think ye of Christ?’ is by not asking it at all, but by ascertaining, rather, what your audience thinks of the Church” (Corpus Christi, preface). In his book, McGraw argues similarly. Not only does he get to his answer quickly—it’s a short book—but he also concludes that how we regard the church says more about how we regard Christ than how we regard the church herself. He makes this case in three successive ways.

First, he tracks down the historical origin and development of the phrase “no salvation outside the church,” starting with Cyprian, Augustine, and then looking to Reformers like Heinrich Bullinger, William Ames, John Calvin, and Zacharias Ursinus. The author shows that the latter argued their points around the important distinction between the church in her twin capacities as invisible and visible. He then surveys the Westminster Confession of Faith, and the thinking of John Owen, Francis Turretin, Wilhelmus à Brakel, and Herman Witsius—who taught that membership in the church invisible is absolutely necessary for salvation, while membership in the church visible is ordinarily necessary for salvation. McGraw rightly argues that both have their place and priority, and that the “church visible comes first in order historically, while the church invisible comes first in order theologically” (86). Nicely said.

Secondly, McGraw hunts down the scriptural evidence to see whether these confessional giants and standards hold up. As he discusses the covenantal structure of Scripture, he lands upon the importance of circumcision as the God-given sign and seal of membership among God’s people. Circumcision inevitably draws out the distinction between the visible and invisible nature of God’s corporate people, since the outward circumcision of the body was meant to signify the inward circumcision of the heart. Moses and the prophets capitalized upon this, as did Paul (Rom. 2:28–29). The author then shows how the New Testament ties circumcision to baptism as the covenantal sign that ushers new members into the expanding visible people of God since both sacraments fulfill the same function, have the same meaning, are applied to the same recipients, and underline the same significance of the church visible for the salvation of God’s people.

It is true that a person can be saved without joining the church or being baptized—like the thief on the cross. And yet, speaking to this very example, the author cites J. C. Ryle who wisely remarked that God gave us this one example of a deathbed conversion so that we would not give up on anyone, but he gave us only one, so that we might not be presumptuous and dismiss the importance of affiliating with the church. The church, and all the means God has given to her (like baptism) only emphasize how crucial these are for the believer.

Thirdly, McGraw brings together his historical and scriptural evidence. For example, he demonstrates how important the preaching of the Word of God is for salvation. He looks to Romans 10:14, which states,

I think McGraw should be complimented for obtaining his goal—and for doing so with brevity. This little book could have been even more concise, but not by much. And yet, for its size, it is packed with solid work—especially helpful in its exposition of the distinction between the church visible and invisible. I’m pleased that the author has not lost sight of a more general readership and the types of questions that Bible readers like you and me, might ordinarily ask.