Liberty in the Things of God: The Christian Origins of Religious Freedom 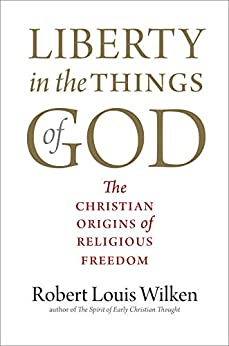 Liberty in the Things of God: The Christian Origins of Religious Freedom

For a long, long time, so the story goes, religious freedom was utterly unknown and even unthinkable in the Western world. Then dawned the Enlightenment, and secular minds dreamed up this noble idea in their disdain for the forced belief of Christendom and in exasperation at the staggering amounts of blood shed during the early modern wars of religion.

Robert Louis Wilken, prominent historian of early Christianity and professor emeritus at the University of Virginia, proposes to debunk this widely held secular narrative that presents “Christianity as inescapably intolerant and religion as prone to violence” (2). Wilken begins during the third-century persecutions of Christians when Tertullian, and, later, Lactantius and a few others, proposed the idea that “religious faith is an inward disposition of the mind and heart and for that reason cannot be coerced by external force” (1). Tracing the idea of religious freedom through medieval and, especially, Reformation-era texts, he ends with the famous writings of John Locke.

Does he succeed in overturning the dominant secular narrative? Wilken conclusively shows that arguments for religious freedom and liberty of conscience are not absent from the early church, and that they played an important role in Reformation and post-Reformation debates, well before the Enlightenment. Wilken is at his best as he demonstrates the variety of early modern Protestant and Catholic authors who argued about and even for religious freedom and liberty of conscience—in Germany, Switzerland, France, the Netherlands, England, and America. Reformation-era thinkers, not Enlightenment secularists, did the heavy lifting on religious freedom. Wilken well makes the case that John Locke’s famous argument for religious freedom, Letter Concerning Toleration, in basic ways simply followed a “well-trodden path” (173).

If the book’s subtitle has you expecting proof that religious freedom played a key or even a minor role in Christian thought throughout time, between the early Christian centuries and the Reformers, you will be disappointed. It is one thing to argue that Tertullian’s work was (re)discovered and invoked by Protestants and Catholics alike during the era of Reformation, quite another to demonstrate a long-term Christian trajectory, tradition, or even significant strand, of emphasis on religious freedom. Gregory the Great, Alcuin of York, Thomas Aquinas, and other medieval writers appear here, but the demonstrable influence of Tertullian’s ideas comes in the context of the Reformation and the century after.

When an alternative narrative like this is proposed, a novel set of facts invariably comes to light. Here are a few examples: You will learn here that Tertullian was the first person to use the phrase “freedom of religion,” even if the idea of this freedom as a natural right comes more than a millennium afterward. Later, you will learn that William Penn likely learned Greek from John Locke at Christ Church, Oxford, under Vice Chancellor John Owen and Chancellor Oliver Cromwell. Throughout you will encounter the many opposing and contradictory uses to which the parable of the wheat and tares has been put in church debates over political questions.

This beautifully written book should inform ongoing discussions of two-kingdoms theology, the importance of Renaissance humanism to the Reformation, the unraveling of the political notion of corpus Christianum, and the historical emergence of what are now called confessional churches.