Recovering from Biblical Manhood & Womanhood: How the Church Needs to Rediscover Her Purpose 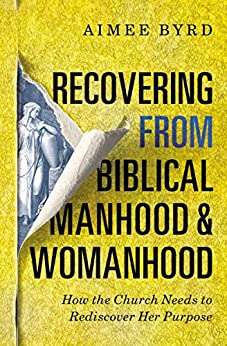 Recovering from Biblical Manhood & Womanhood: How the Church Needs to Rediscover Her Purpose

Aimee Byrd’s volume was the object of criticism even prior to its release. After its release, many attacks have continued. As a member in good standing in the OPC, Byrd has written a fine book for an open discussion about biblical manhood and womanhood. At the heart of her presentation are pertinent insights into facets of biblical revelation, e.g., the centrality of Christ, union with Christ, an eschatological perspective, the bridegroom/bride theme, submission to the authority of Scripture, and a serious respect for the church and her officers.

At the core of Byrd’s concern is that both males and females live in integral unity and communion as disciples in Christ’s church, reflecting the new heavens and new earth. There are gender stereotypes that hamper the church’s ministry to enhance the dynamics of Christ’s calling both genders to mutually benefit from one another in service to Christ’s kingdom and church. Fundamental to Byrd’s point is the positive notion that “there isn’t a male version and female version of Scripture . . . [rather] we learn from both men and women in Scripture” (43) as “all of Scripture is meant for coed reading and understanding” (51). There is instruction from both females (e.g., Huldah, Ruth, Rahab, Deborah, Abigail, Elizabeth, Mary, Mary/Martha) and males for the benefit of the church in Scripture. Byrd definitely realizes that the male voice is the dominant interpreter of God’s activity recorded in Scripture (64). Even so, the church is hindered by a false patriarchal reading as well as by the patronizing marketing of the Bible to women.

Byrd presents an outstanding critical analysis of an evangelical environment that is primarily characterized by its desire not to mimic the culture. She ably challenges the evangelical world with the integrity of historic orthodoxy on the Trinity and the elite status/power of the parachurch from her own confessional ecclesiastical alignment. Her criticism of the Council on Biblical Manhood and Womanhood on the Trinity and its position on the eternal subordination of the Son should be heard, especially as it affects the gender and complementarian discussion, noting the position of ontological subordination of women to men (103; see 192–93). In light of this theological problem, she powerfully affirms the Nicene Creed and reminds us that “Jesus commissions the church to make disciples,” not parachurch organizations (156). In this context, it should not be the parachurch providing the primary voice for women, but the covenantal body of Christ’s church under the rubric of discipleship (163–65). After all, Scripture does not speak of laywomen being subordinate to laymen at the lay level of teaching (177).

Upholding the biblical position for male ecclesiastical office, Byrd wishes to press a view of discipleship in which men and women are called to the “same mission: eternal communion with the triune God . . . pursu[ing] the same virtues . . . to behold Jesus” (109). She is not oblivious to the “distinct relational responsibilities” of men and women as disciples, nevertheless she points out that “Christian men and women don’t strive for so-called biblical masculinity or femininity, but Christlikeness” (114).

Here are a few areas of caution. With respect to the pre-Fall narrative between the man and the woman, Byrd is vague on Adam’s federal position of headship, which affects Federal theology (116). Her clarity in support of Federal theology elsewhere would have been helpful here. Second, Byrd maintains that male ordination is a “secondary” and “not a primary” doctrine for the church (121). Here, she would do well to reevaluate by reversing her fine eschatological perspective. The model for the present ordination in the church is the twenty-four male elders around the final throne of Christ (Rev. 5). This point elicits a third caution; in view of Byrd’s ecclesiastical vows, she may be served well by a study of the government and worship documents (regulative principle) at the Westminster Assembly and the fine exegetical work of our church father, George Gillespie. Nevertheless, the volume is a good read, worthy of discussion in Christ’s church!