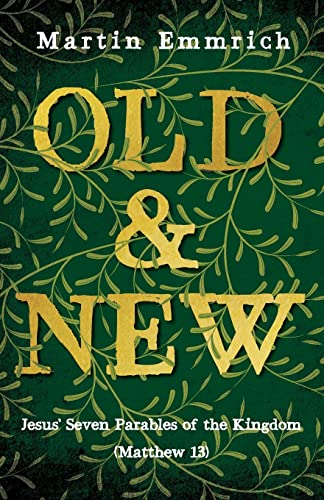 Reviewed by: Ken B. Montgomery

Marshall McLuhan memorably asserted, “The medium is the message.” What point is he making with this aphorism? If you want to know what someone is saying, first pay attention to the means of communication that is being used. A nuanced theory will not be argued on the pinky-sized paper of a fortune cookie; a pithy joke will not take up the space of a five-volume tome.

The didactic vehicle that our Lord Jesus consistently chooses to use in his ministry is that of teaching in parables. “Indeed, he said nothing to them without a parable” (Matt 13:34b). In what way are parables so apropos given the content of Christ’s message—namely, the coming of the kingdom of heaven? Most basically, the parables bring a separation between those who see and embrace Christ in faith, and those whose eyes are blind in unbelief and so fail to apprehend the glory of Christ. A parable is like an autostereogram—a 2D image with a 3D image hidden within: it takes a certain focus (i.e., faith) to see the reality that lies just beneath the surface!

Pastor Emmrich in Old and New has given us a cogent collection of theological and pastoral reflections on the seven parables of the kingdom in Matthew 13. He notes that these parables follow immediately on Christ’s identification of his true family in Matthew 12:46–50. Part of doing the will of the Father in heaven (12:50) is to heed the kingdom-word announced through the parables. To perceive is to receive.

On the first “Parable of the Sower,” Emmrich observes that in contrast to the old covenant era, the word of the kingdom is offered by Jesus “to everybody, with no distinction or discrimination” (16). The “good soil” is characterized not by a mere momentary heeding of the gospel, but an ongoing and persistent receiving of the word: “the kingdom calls for a decision, but also for a constant reaffirmation of the choice, which translates into endurance” (17).

Regarding the “Parable of the Weeds,” we learn that the affliction of and opposition to the people of God are not obstacles to the kingdom’s growth. Emmrich writes that the struggle between the followers and enemies of Christ is a divine necessity, because “the battleground is the appointed sphere in which the good seed must grow” (41).

Especially insightful is Emmrich’s exposition of Psalm 78:2 as quoted in Matthew 13:35: “I will open my mouth in parables; I will utter what has been hidden from the foundation of the world.” The parables can be interpreted properly in part “as the divine remedy to the continuing tale of Israel’s sin and God’s covenant faithfulness” (70). The parables then not only reveal the manner of the arrival and growth of the kingdom of God, but they help solve the “riddle” that Paul references in Romans 3:3–4: “does their [the Jews’] faithlessness nullify the faithfulness of God? By no means!”

Each chapter of Old and New is leavened with supporting vignettes and references from history and present-day culture. This book will be profitable for any preparing studies or sermons on the parables of Jesus, as well as those who are looking for devotional material on this rich portion of Scripture.

Redeeming Expertise: Scientific Trust and the Future of the Church

Following God Fully: An Introduction to the Puritans

A Gospel-Shaped Marriage: Grace for Sinners to Love Like Saints

Redeeming Our Thinking about History: A God-Centered Approach

Reformed Ethics, vol. 2, The Duties of the Christian Life