What Is Saving Faith? 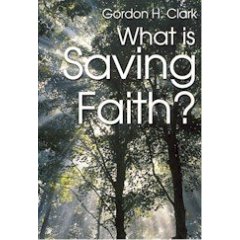 What Is Saving Faith?

The nature of saving faith is an important consideration in the current debates about justification. Given that we are justified by faith alone, one may rightly ask, what precisely is the nature of that faith? In this connection, then, the republication of Gordon Clark's treatment of the subject is noteworthy.

There are actually two works being republished under this title: Faith and Saving Faith (first published by the Trinity Foundation in 1983) and The Johannine Logos (first published by Presbyterian and Reformed in 1972). While the two works address concerns particular to each, they both treat the nature of saving faith, and they come to a unified position.

Clark argues that elements have been added to the definition of faith by many Protestants that compromise its character. If any of the fruits of faith are imported into the conception of faith itself, then the notion that true saving faith is that which looks away from itself to its object is lost. In response to such concerns, Clark seeks to recapture an understanding of faith that is free of any admixture of works, a faith that itself is not saving, but which assents to the proposition of the gospel that Christ alone saves.

In his foreword, John W Robbins seeks to put Clark's examination of faith in its historical context. Robbins argues that "long before the Neo-orthodox theologians thought of saying that faith is an encounter with a divine Person rather than assent to a proposition, preachers who ought to have known better taught that faith is trust in a person, not belief in a creed" (p. 9). Robbins is right to argue that " 'trust in a person' is a meaningless phrase unless it means assenting to certain propositions about a person" (p. 9) - the kinds of propositions that we find in the Bible and in the confessions of the church. However, he is wrong to question whether "having a 'personal relationship' with Christ . . . means something more than assenting to true propositions about Jesus." If it does mean something more, Robbins wonders, "what is that something more?" (p. 10).

Clark regards the addition of these requirements to assent in the Westminster Confession of Faith to be "unfortunate" (p. 40). One begins to wonder at this point how Clark is restoring the original Reformed definition of faith when he takes issue with Westminster's definition and, in varying degrees, the definitions of Calvin, Owen, C. Hodge, Warfield, and Berkhof, among others. Given his oftentimes trenchant critique of leading Reformed theologians who have extensively treated the subject, it becomes difficult to see how Clark is defending, as he claims to be doing, a Reformed view of faith. Clark is clearly not within the Reformed tradition in defining faith itself as knowledge and assent alone.

Clark sounds the same note again and again: faith is believing, and that means "assent to propositions." Anything added to this definition of saving faith, as far as Clark is concerned, is incomprehensible and irrational. In this book, Clark puzzles over what fiducia (trust) may mean as the completing element of saving faith. His wonderment remains a puzzle to me.