The Courage to Be Protestant: Truth-lovers, Marketers, and Emergents in the Postmodern World 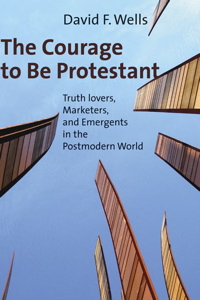 The Courage to Be Protestant: Truth-lovers, Marketers, and Emergents in the Postmodern World

The Courage to Be Protestant: Truth-lovers, Marketers, and Emergents in the Postmodern World, by David Wells. Published by Eerdmans, 2007. Hardback, 253 pages, list price $26.00. Reviewed by OP historian John R. Muether.

Many readers of Christianity and Liberalism, by J. Gresham Machen, finish the book pining for a modern rewrite of this classic. In some ways, David Wells has accomplished this task in his most recent book. This is the final product of the Gordon-Conwell Seminary professor's two-decade-long project to study the effects of modernity on contemporary evangelicalism. But The Courage to Be Protestant is more than a summary of his previous four books. As the subtitle suggests, the focus of his concerns has shifted from the megachurch to the emerging church movement.

Wells argues that the radical subjectivism of the emergent movement (where the emphasis falls on my story and my journey) is merely the latest manifestation of human autonomy. Notwithstanding this movement's disdain for megachurches, its catering to the nimbleness and flexibility of the postmodern self, Wells rightly observes, is just as market driven as the big-box spirituality of the baby boomer generation. This subjectivity forms the breeding ground for the emergent mantra that "the culture gives the church its agenda." Wells warns that such a formula allows sola Scriptura to be usurped by sola cultura. The current obsession with the Bible's "relevance" has diminished a commitment to the Bible's sufficiency, and the church's otherwordliness had devolved into a "slick this-worldly" posture.

As in his previous work, Wells strains to distinguish "classical" evangelicalism (ca. 1950) from contemporary evangelicalism. Still, his analysis of the movement's current weakness is strikingly similar to the argument that came from Machen's pen. Matching Machen's order, his chapters cover doctrine (Wells titles it "truth"), God, man ("self"), Christ, and the church. And as in Machen's book, many of Wells's strongest points are in this last chapter. Cleverly turning the emergent movement's passion for "authenticity" on its head, Wells argues that the signs of genuine authenticity are what historic Protestantism described as the marks of the true church.

Courageous Protestantism demands that the church recover the centrality of preaching, proclaim the visible gospel in the sacraments, and protect the moral character of the covenant community. "An authentic church," Wells insists, "is one that is God-centered in its thought and God-honoring in its proclamation and life."