Reforming or Conforming? Post-Conservative Evangelicals and the Emerging Church 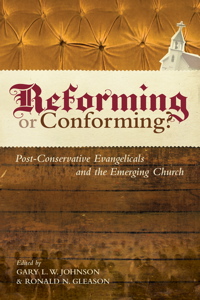 Reforming or Conforming? Post-Conservative Evangelicals and the Emerging Church

Gary Johnson and Ron Gleason have given us a book of fine articles surveying the current theological landscape of progressive evangelicals. And with those surveys come biblical critiques of them.

David Wells's valuable preface explains that the church is in a "Dickensian moment": it is the best of times and the worse of times. In terms of earthly possessions, we have it all. Yet we are drowning for want of spiritual vitality. Johnson's introduction draws the connection between postmodernism and liberalism: both capitulated to their respective cultures. Paul Wells gives us a chapter on the doctrine of Scripture and shows how progressive evangelicals have gone the way of neo-orthodoxy. John Bolt turns in a helpful chapter on theological method, though he does not always adequately distinguish between sola Scriptura and nuda Scriptura. We would also question his proposal for developing a metaphysic that is prior to and independent of biblical revelation (pp. 62, 79).

Paul Helm analyses John Franke's theology, showing how Franke cannot avoid foundations and advances a position which "fatally compromise[s] the gospel" (p. 107). Scott Clark, in a must-read chapter, speaks against the "liquidity" of evangelical appropriations of postmodernism and offers boundaries that are essential to the Christian faith. Paul Kjoss Helseth sets the record straight on Old Princeton. According to his persuasive argument, Hodge and company were not a bunch of rationalists after all! Jeff Waddington concludes that Van Til was not a foundationalist, and shows that he stood upon the principium of divine revelation.

Ron Gleason suggests ways in which Bavinck's response to the ethical theologians of the Netherlands years ago may help us formulate a response to the Emergent Church today. Guy Waters teases out the ways in which Emergent guru Brian McLaren depends upon many of the non-Reformed views of N. T. Wright. Phil Johnson explains that the Emergent Church is wrong to equate doctrinal certainty with arrogance. Martin Downs asks whether the church has to change to fit the culture, as the Emergent Church seems to think. Greg Gilbert explains that Brian McLaren's revised doctrine of hell compromises the gospel. Gary Gilley offers a good survey of postmodernism and shows how Emergent leaders deny essential Christian doctrines in the name of ministering to a postmodern culture.

The articles in this volume make it clear that movements today from the Emergent Church to the New Perspective on Paul to postmodernism all reject confessional Reformed theology. If you believe that confessional Reformed theology is in fact essential to the advancement of the gospel (as you ought), then this book will equip you to give an answer for the hope that is in you.

My only major criticism of the book is that it does not include a bibliography. Also, I detected errata on pages 40, 71, and 117 (footnote 25).