Letters from the Front: J. Gresham Machen's Correspondence from World War I 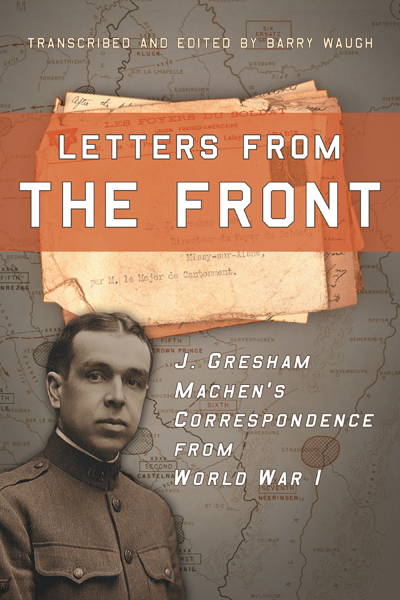 Letters from the Front: J. Gresham Machen's Correspondence from World War I

Imagine yourself being a professor in your mid-thirties at a reputable theological seminary. You are also a Presbyterian minister, who preaches regularly and pitches in at your local congregation. You are only an assistant professor, but you are sitting on research for a couple of books that will likely gain you promotion and tenure. Although you are single, you are deeply involved in family matters and have a special attachment to your mother, who is a widow.

These are the circumstances of your life when your country goes to war. You believe that your nation should stay out of the conflict. You even argue with family members about the nation's foreign policy.

Considering these circumstances, would you drop everything, even though you are a man of routine, and find a way to assist in the war effort?

This is the dilemma that J. Gresham Machen faced in 1917, when the United States entered World War I. Nothing in his life would have led anyone to believe that he would join the Young Men's Christian Association (an organization about which he had serious theological reservations) for the last eleven months of the war. But he did just that—leaving behind work, family, comfort, and habits to endure serious hardships and expose himself to life-threatening dangers.

His work in France largely consisted of cooking hot chocolate and stocking the Y Hut. He wrote to his mother, "I feel as though I were making John Wanamaker look like a piker. Do you prefer Star, Horseshoe, or Battle Ax chewing tobacco?… And then I have handkerchiefs, fountain pens, many kinds of cigars, cakes, cigarettes, candles, letter paper, jam, tooth-brushes, a library, etc." Only after the armistice did he begin to teach and preach to soldiers responsible for stabilizing Europe. He did all of this at the age of thirty-six, only two years before he was to give a series of endowed lectures at Union Seminary (Richmond), which formed the basis for his book entitled The Origin of Paul's Religion (1921). It was not what any of his friends or family members would have expected, though they would not have been surprised to read about how many plays he saw in the theaters of Paris.

During the war, Machen wrote numerous letters to his family (primarily his mother). Barry Waugh has transcribed, edited, and annotated those letters in this volume. It is a welcome contribution, if only because it is the first publication of Machen's correspondence. His observations about people, politics, routines, plays, books, cities, and religious activities would be worthwhile in their own right to anyone who admires this conservative Presbyterian. But to see his reflections during a war that devastated Europe is all the more valuable.

These letters reveal no David Brainerd–like saint, who thought only of others after glorifying God. Machen was human, and both his foibles and his virtues come through. This is all the more reason to appreciate Waugh's effort. We need heroes who are not one-dimensional.

Click here for a second review by Allen Tomlinson.