Openness Unhindered: Further Thoughts of an Unlikely Convert on Sexual Identity and Union with Christ 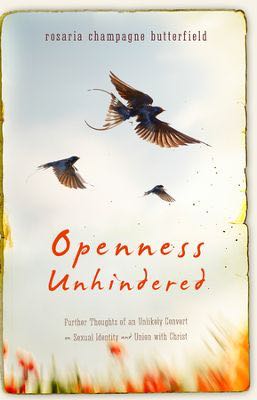 Openness Unhindered: Further Thoughts of an Unlikely Convert on Sexual Identity and Union with Christ

As its subtitle indicates, this volume is a companion of sorts to the author’s striking 2012 memoir, Secret Thoughts of an Unlikely Convert, in which she chronicled her conversion to Reformed Christianity from her former life as a lesbian. While the earlier book was primarily biography interspersed with theological reflection, this new work is more theological reflection interspersed with biography. It is a valuable resource, whose message and tone the church would do well to absorb.

After introducing some important themes and recounting aspects of her life’s story in the preface and opening chapter, Butterfield moves in chapter 2 to a key idea, both in her book and in larger societal debates about sexuality: identity. She argues that believers should not find their identity in their own experience or actions, but in who God is and what he has done. We are united to Christ, she highlights, and thus justified and sanctified.

This discussion of identity bears fruit especially in chapters 4 and 5, in which she argues against the very concept of “sexual orientation” and opposes use of the term “gay Christian” to describe believers who feel same-sex attractions but strive to resist them. These are controversial assertions, with which many thoughtful Christians disagree, but I believe that she makes a compelling case on both issues. Christians should, at least, contemplate her argument that such concepts and terms do no favors to anyone: they tend to deceive Christians who are struggling with same-sex attractions into defining their identity in sexual terms, rather than in Christ, and to deceive Christians without same-sex attractions into downplaying the serious character of their heterosexual sins. In chapter 6, Butterfield offers additional insights into the use of these contested concepts and terms by describing her collegial interaction with a friend who describes herself as a “gay Christian.”

In the midst of this discussion of identity, chapter 3 offers important reflections on repentance as the antidote to shame and temptation. While Butterfield’s description of the relationship between grace and repentance (and of the nature of Christ’s temptations) is not quite as clear as it could be, her main point is crucial: Christians must never let confidence in God’s grace be a substitute for repentance, and must commit themselves to confessing sin and not just admitting it.

The final chapter, on community, goes far beyond the matters of sexuality that are the book’s main concern. But in many respects it brings the volume to a fitting close, for Butterfield points to mutual encouragement and hospitality as chief means by which God equips his people to resist temptation—sexual or otherwise—and to grow in grace.

One of the best things about this volume is its underlying tone and attitude. It wholeheartedly promotes holiness and godly sexuality, but without the rancor, vitriol, and self-righteousness that too often poison conservative Christians’ contributions to societal debates on sex and marriage. Butterfield’s self-critical and generous spirit is far from the least of this book’s virtues.

Click here for a review of Secret Thoughts of an Unlikely Convert.