Choosing the Good Portion: Women of the Orthodox Presbyterian Church 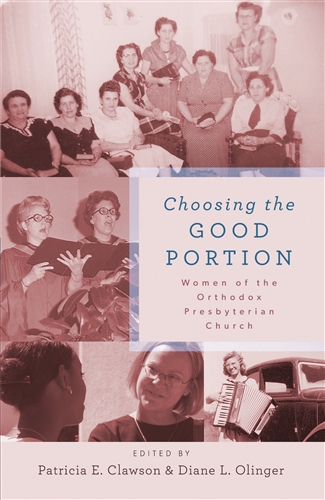 Choosing the Good Portion: Women of the Orthodox Presbyterian Church

When my wife, Lucie, was growing up in an Orthodox Presbyterian parsonage, her family almost always had several guests for Sunday dinner. Her mother, Rosemary Commeret, was an outgoing hostess who naturally expressed warm piety and upbeat enthusiasm. Her nickname, “Rosie,” fit her disposition, and she was a counterbalance to her husband, Ray. He was also a most welcoming and good-humored host, but was not inclined toward Pollyanna, as would have been apparent from the morning’s sermon. Rosemary, who also had a lovely singing voice, played an important complementary role in their ministries together. Rosemary passed away this past fall. Her story parallels that of many pastors’ wives who are included in this book of memoirs, written by women, children, and close friends of many who played invaluable roles as Orthodox Presbyterian women.

One of the good aspects of being part of a small denomination, especially for families of pastors and other church officers, is that all sorts of other people from around the country seem like part of an extended family. Some will be known by reputation nationally and may be encountered on occasion in person at a general assembly or when they and their family have visited one’s local church. Others are well-known regional figures who are regulars at one’s Bible conference.

Having been part of that extended family, and so having known many of the subjects of this volume, I found it to be a pleasure to read. In the interest of full disclosure, I should say that I have a weakness for Orthodox Presbyterian women. That started, of course, with my affection for my mother. But when I was a very young boy, the warmest grown-up I knew, outside my own family, was Eleanor Kellogg, the wife of our pastor, Ed Kellogg (who also scored high for outgoing enthusiasm). When Eleanor substituted at our Christian school, she played the piano in what I later came to think of as the Wheaton style—lots of extra notes. Our family kept up with the Kelloggs over the years, and I never saw reason to change my view of their genuine, pious warmth. I am not surprised to learn that the Kelloggs lived by the rule, “Let not the sun go down on your wrath.”

Later, when I was in seventh grade, Dorothy Partington (later Anderson and Barker)—like Eleanor Kellogg, the subject of one of the chapters in this collection—became my favorite teacher. She had just turned twenty-two and had been out of college several years. She was extraordinarily smart, and she combined excellent pedagogy with liking games and having a good time. In another time and situation, she might have become a scholar or executive. Instead, she dedicated herself to serving the church in the two principal ways open to a talented woman: in Christian education and in what turned out to be a more challenging vocation, as a pastor’s wife. Later I saw her and her husband, Bob, in a struggling church in Hamden, Connecticut. (That church, by the way, was held together largely by the impressive family of Henry and Ruth Bacon, and Ruth’s role is rightly celebrated in one of these chapters.)

One more childhood impression comes from 1946, when our family stayed for a week in an apartment in Wildwood, New Jersey, next to that of the Hunt family. Bruce Hunt had been allowed to return to Korea, but the rest of the family had to stay behind. To my seven-year-old imagination, the five Hunt children seemed models of friendly, disciplined, well-behaved children. I can still picture them playing board games on the outdoor wooden steps of the frame building. The older girls took care of the younger twins, and everything appeared to be harmonious. The account of Katherine Hunt in this volume, based on her letters, reveals what a battle it could be for a single parent of five to provide such character-building discipline. Beyond that, Katherine Hunt’s letters are just one of the many reminders in this volume of the terrific sacrifices that those dedicated to missions have been willing to make. The book recounts separations and the agonies of not knowing whether a husband will survive, arrests, house break-ins, kidnapping, and martyrdom. These make the most dramatic and some of the most moving reading.

One of the other moving chapters is that about Grace Mullen. A remark of hers during the time she was battling cancer was the inspiration for the volume. And as someone who has done more than anyone to preserve the resources for OPC history, this collection is a fitting tribute to her that she would have appreciated. Gracie was a good friend of mine from some years on the staff together at the French Creek Bible Conference, an institution we both loved and which had a significant influence on a number of the subjects in this volume. Later, as a historian, I appreciated Grace’s deep knowledge and immense helpfulness. She was someone who exemplified the fruit of the spirit.

One feature that does not appear often in this volume is humor. But since that is a significant part of extended family histories, and also an important source of relief, especially when ministerial families get together, I will attempt one anecdote. This is strictly from within my own immediate family’s history, and it relates to one of the stories in this volume. The section on Mary Eckardt (Bob Eckardt is my first cousin), refers mainly to the loss of their dear adult son Doug in a bike accident. But it also includes a story of the family’s life-threatening experience when, with three boys in the car, they were pulling a trailer cross-country in 1965 to the general assembly in Portland. Their car broke down in the middle of the mountain road, and Mary’s prayers were answered when a fire crew soon came by and helped them out. Meanwhile, their close friends, Ray and Rosemary Commeret (Ray and Bob Eckardt had been at Westminster together), were also going to the GA with four children in the car and pulling a trailer. Coming down a mountain road, their trailer started to fishtail badly, and the children thought they were going to die. At last the two exhausted and travel-weary families pulled into the assembly’s parking lot at nearly the same time. Rosemary provided the needed comic relief when she asked Mary, “So when are you going to get your divorce?”

The Orthodox Presbyterian Church, in a significant sense, owes its existence to an extraordinarily intelligent and dedicated woman, “Minnie” Machen, who is the subject of the opening chapter of this book. If Minnie Machen had not been the sort of brilliant, pious, and orthodox Presbyterian that she was, her son Gresham would probably not have been the sort of person to take the stands he did that led to the founding of the denomination. So it is fitting that this book begins with a tribute to her.

It is also appropriate to include remembrances of a number of other early women, such as the Rothwell sisters, the Shillito sisters, Marguerite Montgomery, and Anna Rath, who were crucial to funding the denomination that had to start from scratch at the depths of the depression. They are a reminder that the orthodox Presbyterian movement at first included a few truly privileged people. Most wealthy, conservative Presbyterians were not ready to give up the comforts of the Presbyterian Church in the U.S.A. But the few who did were immensely helpful.

The story of Hattie and John DeWaard, and what they had to give up to leave, is a reminder of the great sacrifices that some of the less well-to-do had to make. My father, who was the missions general secretary in the early days, cultivated the good graces of the well-to-do ladies. He also visited the families of the home missionaries, many of whom he described as “poor as church mice.”

I could have mentioned many more memories in this anecdotal review. There is no way to adequately celebrate all that these and so many other women have done to provide, through God’s grace, much of the strength of the denomination. So I will just recommend this volume to anyone who is part of the extended OP family. It is a place to be reminded of, or to learn about, many of the saints who have gone before or are still around.

The author is emeritus professor of history at the University of Notre Dame. Choosing the Good Portion: Women of the Orthodox Presbyterian Church, edited by Patricia E. Clawson and Diane L. Olinger, is available from the Committee for the Historian for $15.00 plus shipping here (by credit card) or at bookorders@opc.org to be invoiced.