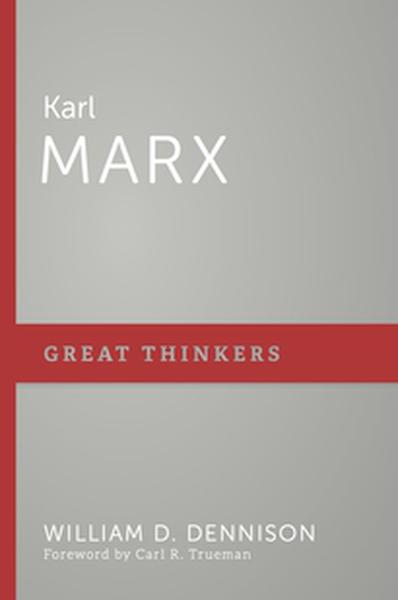 This outstanding treatment of Karl Marx, written by OP minister and professor William Dennison, appears in time for the two-hundredth anniversary of Marx’s birth on May 5, 1818.

Marx—like Nietzsche, Freud, and Darwin—is one of those nineteenth-century figures who has seminally impacted the twentieth and twentieth-first centuries. Every time one thinks we’re over and done with him, take the fall of the Berlin Wall in 1989, Marx comes roaring back—for example, the Occupy Wall Street movement, the mark made by socialist Bernie Sanders in the last US presidential election, and the Marxist leader of the UK Labor party, Jeremy Corbin.

Marx’s perpetual appeal is surely what Dennison notes as “Marx’s psychological analysis of avarice and greed on the part of the capitalist” (92). Marx, of course, denies biblical revelation and attempts to remain within naturalistic humanism in his analysis, undermined by his own materialism, which does not, consistent with its own metaphysic, allow such insight. Because of common grace (and thus in spite of himself), “Marx clearly understood capitalism’s transition in the political economy during the Enlightenment—that is, its turning of the traditional Western vices of self-interest, passions, and greed into virtues” (92). Marx shows how far this goes and how property and money acquire divine attributes (93).

Marx is right about the seductive power of these things to man in his fallen state, but his proposed remedy is at odds with this state of affairs: “to place confidence in the human will to return to a state that bypasses the sensual gratification of wealth and power is sheer illusion” (94). Man’s original sin was not “an offense toward the objectification of nature [as Marx perceives capitalism]; rather his sin was against the authority of his personal Creator,” as is that of Marx and Marxism (95). Though God’s common grace permits Marx some insight, his rebellion against God subverts it. The antithesis resulting from man’s sin means that Marx’s prescription for what ails fallen man is even further off the mark, as if man truly desires to throw off his greed and embrace a radically egalitarian society.

Dennison begins his book with a treatment of the complicated Marxist tradition, detailing both orthodox Marxism and departures from it. He then proceeds to “a brief sketch of Marx’s life.” One interesting biographical note is that Marx, though struggling at times with crushing poverty, “upgraded” to better neighborhoods and lifestyles every time he had an opportunity to do so. He may have hated capitalism, but he never disdained its fruits for his personal use, whether through his friend Engels or his various inheritances. The third chapter brings us to Dennison’s primary focus: Marx’s philosophy of history, which is nothing less than a secularized version of Christian eschatology in which fallen man achieves salvation through the proletariat seizing the means of production and turning the table on his bourgeoisie oppressor, all giving way to socialism, and, finally, the truly classless society, communism.

The best is yet to come: Dennison’s final chapter and brief concluding remarks are a tour-de-force presuppositional critique of Marx’s view of history. Especially helpful and insightful is Dennison’s analysis of Marx in terms of Augustine’s (and the Westminster Confession of Faith’s) four-fold state of man. Dennison demonstrates how Marx borrows from the Christian faith to undermine that faith and to promote his materialistic utopia. This is an excellent Van Tilian analysis of Marx that should be procured and carefully studied by all ministers and interested laymen.