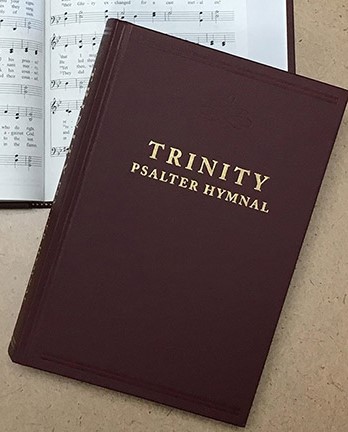 Having been raised in the OPC, singing from the Trinity Hymnal all my life (mostly from the “Blue,” some from the “Red”), it was with no small apprehension that I received the news that our denomination was producing a new psalter-hymnal. After all, how could Amazing Grace be anything but no. 402? Hymnals, we all know, are treasured parts of our lives that sink deep into our memories, and this was really going to throw me off!

But whatever apprehensions I initially entertained, the final product has proven them all wrong. It was with excitement that I pored over my freshly printed copy at this summer’s General Assembly, creating my own lists of hymns and psalms that we will sing at Calvary OPC in Glenside, Pennsylvania, as well as categorizations of when they would fit best. I think that you will find poring over it yourself to be an enjoyable and rewarding task.

In the hymnal, we truly have the best of the “Blue” and the “Red” Trinity Hymnal. I am thankful for an increase in explicitly Trinitarian hymns, as well as hymns that are well suited to the Lord’s Supper. The Trinity Psalter Hymnal also includes many outstanding examples of modern hymnody. Our congregation sings with gusto “In Christ Alone,” “How Deep the Father’s Love for Us,” and “Before the Throne of God Above,” along with a number of excellent selections by former director of music at Tenth Presbyterian Church Paul Jones and young OP pastor Jonathan Cruse.

Psalms and hymns have been set in keys that are singable for the modern congregation (I don’t think there are any hymns that reach higher than an E-flat in the melody/soprano). The texts of many psalms and hymns have been updated in such a way that they sound traditional, while also feeling modern and fresh, no easy feat for the poet. And the layout of the hymnal is highly readable—a significant improvement from the “Blue” Trinity, in particular. One downside is that there are a few longer psalms that it may have been better to split up into a few selections, but that is a small quibble.