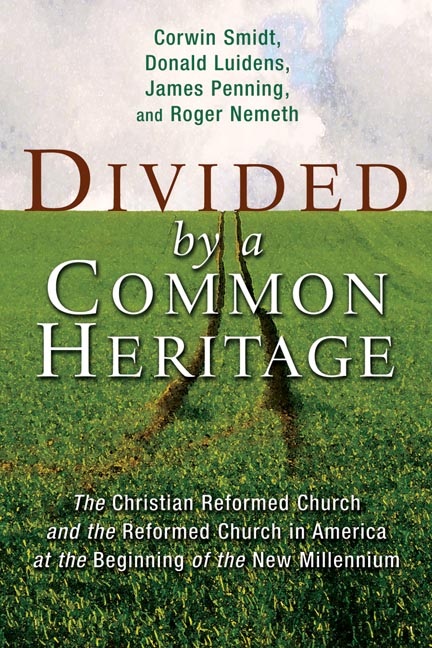 Divided by a Common Heritage: The Christian Reformed Church and the Reformed Church in America at the Beginning of a New Millennium, by Corwin Smidt and others. Published by Eerdmans, 2006. Paperback, 226 pages, list price $24.00. Reviewed by OP historian John R. Muether.

Many recent assessments of American Protestant denominations are deeply discouraging. Mainline demise, owing to demographic changes, geographic mobility, and individualized or consumerist forms of spirituality, have spawned independent and post denominational sensibilities in local congregations. Disappearing in these churches is the theological identity that formerly resided at the heart of what it meant to be a Baptist or Methodist or a Presbyterian. In a word, what is transforming these contemporary denominations is Americanization.

Divided by a Common Heritage is a frank analysis by a team of social scientists (Corwin Smidt and James Penning from Calvin College; Donald Luidens and Roger Nemeth from Hope College). Their extensive survey data suggests that the Dutch Reformed subculture has also succumbed to these Americanizing trends. The Americanization of the RCA began over a century ago. While Abraham Kuyper and others slowed that process in the CRC, that church caught up in the last few decades of the twentieth century.

Congregations in these denominations are no longer sustained by the Reformed articles of faith. The Three Forms of Unity hold a light rein on the theological boundaries of these churches, and both communions seem committed to burning their wooden shoes. Theological orthodoxy is now limited to generic Protestantism, such as the authority of the Bible, the virgin birth, and the death, resurrection, and return of Christ.

Amid increased theological pluralism and diversity in worship in the CRC and the RCA, these researchers find greater convergence on social views. A general political conservatism still prevails within congregational life. Yet even on social issues, there are disruptive “progressive” trends, such as on homosexuality. If congregations survive in these conditions, it will not be because of any denominational “staying power,” but because of a “web of loyalties” that include extradenominational alliances.

Does this mean that reunion is in store for the Dutch Reformed in America? Perhaps so, because the divisive issues of the past are no longer insurmountable obstacles. But these authors warn that mergers for expedience or survival on the one hand, or for purity on the other, could result in sizable defections and produce a body like the reunited mainline Presbyterianism that is “less than the sum of its parts.” It may be best, they argue, for congregations to labor for nondenominational forms of grassroots ecumenicity. In other words, a decline in denominational identity may be the best hope for congregational survival.

Orthodox Presbyterians have inherited much from the Reformed robustness of Dutch-American Calvinism. For that reason, this book is a sobering reminder of the precariousness of Reformed denominations. This is a portrayal less of a common heritage than a jettisoned heritage. Perhaps the most significant contribution of R. B. Kuiper, Cornelius Van Til, and other Dutch-American immigrants into the OPC, was their testimony to being Reformed in ways that went beyond ethnicity. A firmer foundation requires a deeper connection to the Reformed tradition and a more consistent practice of our faith. It refuses to negotiate the hard angles of Reformed theology in order to appeal to a generic evangelicalism. Reformed survival in the wilderness of American evangelicalism does not seem possible in any other way.