The Reason for God: Belief in an Age of Skepticism 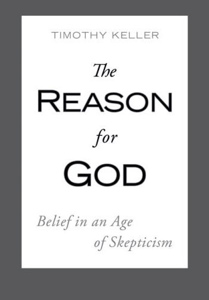 The Reason for God: Belief in an Age of Skepticism

Reviewed by: Brett A. McNeill

The Reason for God: Belief in an Age of Skepticism, by Timothy Keller. Published by Penguin Group, 2008. Hardback, 293 pages, list price $24.95 (paperback, list price $16.00, expected in February 2009 from Riverhead Trade). Reviewed by Pastor Brett A. McNeill.

As a pastor, especially a church-planting pastor, I often encounter the questions of the skeptic. There are many questions about why we believe in God. We need a compelling book that challenges the reader’s system of belief, demonstrating that there is no rational system of belief outside of biblical Christianity. Enter The Reason for God, by Rev. Tim Keller, a PCA minister. The book has received stellar acclaim—arriving on many (even secular) best seller lists. Will his book prove to be what I have longed for as a church planter?

Keller is a masterful communicator. He is engaging and thought provoking. His book reads more like a narrative than a philosophical argument. He demonstrates an acute awareness of the questions being asked and the longing of many non Christians for suitable answers. Two chapters that engage the nonbeliever exceptionally well are chapters 6 (on science and Christianity) and 9 (on the knowledge of Cod). These are engaging and convincing, demonstrating the assumptions of the nonbeliever and demonstrating the compelling case for Christianity.

However, there are some weaknesses in the book. In chapter 8 ("The Clues for God"), Keller runs into what Van Til called the "blockhouse dilemma," which arises when the apologist presents an argument for a god. It is not clear how to get from there to the triune God of the Bible.

Another concern is that Keller defines sin, not in legal/covenantal categories (cf. Shorter Catechism 14), but in relational categories (pp. 160-62). The consequences of this can be catastrophic. Hell is seen as a trajectory, rather than a place of punishment (pp.76-79). This gets worse when Keller seeks to articulate the gospel. Although the atonement is discussed in chapter 12, he does not clearly present the concept of penal substitution, and ends up saying that the cross is a demonstration of the love of God. While this is true, we need to understand the legal necessity for atonement in order to understand why the cross was such an act of love.

Allow me to mention two more concerns. First, Keller does not adequately challenge the presuppositions of the nonbeliever. The first half of the book is dedicated to answering questions of the skeptic (about exclusivity, suffering, evil, science, etc.). Rather than questioning the skeptics’ test of truth, Keller attempts to demonstrate that Christianity satisfies their tests the best. This leads to the second concern, namely, that Keller presents a quite earthly view of Christianity. Repeatedly he argues that the more we obey and follow Christianity, the better the world will become, which he argues is the (or at least a) goal (see especially the introduction and chapter 4). This leaves the reader scratching his head when he reads chapter 11, where Keller critiques those who adopt such an approach on an individual level (see p. 182).

The book does not argue for a Reformed (or even particularly Protestant) view of Christianity. So why the great success? Perhaps it is because the book is written so well on the level of communication. Again, Keller is emotionally and personally engaging. He draws the reader into the book in such a way that it is difficult not to resonate with it. However, on the level of content, the book falls short of what it could be.