The Hope Fulfilled: Essays in Honor of O. Palmer Robertson 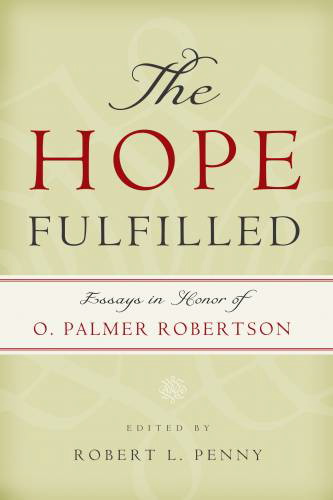 The Hope Fulfilled: Essays in Honor of O. Palmer Robertson

O. Palmer Robertson was a Southern Presbyterian with Old Princeton convictions. He labored in home and foreign missions. He taught at Reformed, Westminster, Covenant, and Knox seminaries. He is perhaps best known as author of Christ of the Covenants.

Written in Robertson's honor, The Hope Fulfilled consists of twenty-seven essays. Among the contributors are Bruce Waltke, Richard Gaffin, Jr., Guy Waters, Terry Johnson, Chad Van Dixhoorn, and William Barker II. There is something in this book for everyone to like, dislike, and skip.

Articles by Waltke and Gaffin are relevant to the controversy at Westminster Seminary surrounding former professor Peter Enns. Enns says that the New Testament authors, in effect, imposed Christ onto the Old Testament. Waltke, however, argues that the Psalms, interpreted with the grammatical-historical method, leads readers "who are not hard-hearted" (p. 26) to the gospel. Enns also says that we must change our doctrine of Scripture in light of its messy particulars. But Gaffin argues that the Bible's own doctrine of itself must control our interpretation of those particulars, rather than the other way around.

Richard Phillips writes about the Reformed doctrine of water baptism against the errors of memorialism and sacerdotalism. He explains the function of sacramental language: that the sign is put for the thing signified. But he wrongly states that the sacraments have no relation to the ordo salutis (the steps by which salvation is realized in an individual's experience), but only to the historia salutis (how salvation is accomplished in history by Christ) (pp. 201–2). This undermines any polemic against memorialism, and is, in fact, the essence of memorialism. What was he thinking?

Waters writes an excellent essay on the development of Norman Shepherd's theology. Robertson, who taught at Westminster with Shepherd, "determinedly maintained that Shepherd had departed from the confessional standards he had sworn to uphold" (p. 207).

Johnson's essay makes a case for reintroducing the practice of reading through the books of the Bible during worship, chapter by chapter, which was widely abandoned in the Reformed tradition. Johnson discusses the causes of its disuse. For example, many churches select the first Scripture reading as a complement to the sermon text from the other testament.

Penny's essay demonstrates how Martin Lloyd-Jones emphasized theological preaching against the cultural forces of counseling, group discussions, professional pulpiteers, and essayists. Reading this essay made me grow in appreciation of him.

Finally, Van Dixhoorn's essay looks at the different approaches used by seventeenth-century British divines to preach Christ-centered sermons. One method was rooted in dogmatics, the other in typology. After a helpful survey of approaches and concerns, he makes a case for the typological method.

The book offers more than this selective survey of highlights. It achieves its purpose of honoring Palmer Robertson.