Guns of the Lion 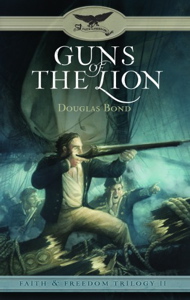 Guns of the Lion

Reviewed by: Karl A. Bacon

As the second installment of Douglas Bond's Faith and Freedom Trilogy, Guns of the Lion begins shortly after the story in Guns of Thunder ends. Ian M'Kethe and the trusted Indian Watakoog are canoeing down the Connecticut River on their way to the new College of New Jersey, where Ian plans to enroll. Along the way, Ian reads a manuscript written by his cousin, Gavin Crookshank, about the many trials he endured during the recent Second Jacobite Rebellion of 1745–46.

The young Scottish shepherd Gavin is taken from his familiar moor by British troops and impressed into duty aboard the admiralty man-of-war HMS Lion. It is learned that Bonnie Prince Charlie and a small army of supporters have sailed from France aboard two ships in an attempt to reach Scotland, organize a rebellion, and take back the throne of England for the House of Stuart. The Lion sails into French waters to prevent the two French ships from carrying out their mission. In a pivotal sea battle, Gavin serves with distinction as a sharpshooter, but Charles escapes and lands safely on Scotland's shore.

Gavin's unique position as a Gaelic-speaking Scot who faithfully served King George II is noticed by the admiralty. He is sent back to Scotland as a spy with orders to infiltrate Charles's army of Scottish Highlanders. Gavin wrestles with his national and familial loyalties to his homeland and to Charles, who is often more rogue than sovereign, and his sworn allegiance to King George II of England. How can he reconcile the command of Scripture to honor his earthly king and obediently serve the King of heaven and earth? Gavin resolves to go as ordered and to do all he can to save lives and prevent senseless bloodshed. Will he succeed?

The historical setting of Guns of the Lion is accurately presented. The reader will learn much about this period of Scottish history. Bond's storytelling is compelling—you will not want to insert your bookmark and turn out the light—and is suitable for ages teen through adult. The plot flows naturally from the character Gavin Crookshank, who is engaging and likeable, one with daily struggles, tests of faith, and foibles we all can relate to. He weighs opposite and seemingly legitimate courses of action as he meditates upon the words of Scripture—an example all would do well to heed. On the first page of his manuscript, Gavin tells his readers in America, "I hope in God." In spite of the many hardships, challenges to both his person and his faith akin to the Pauline perils of 2 Corinthians 11:26, Gavin's hope is confirmed and he remains steadfast to the end.