Why We Love the Church:
In Praise of Institutions and Organized Religion 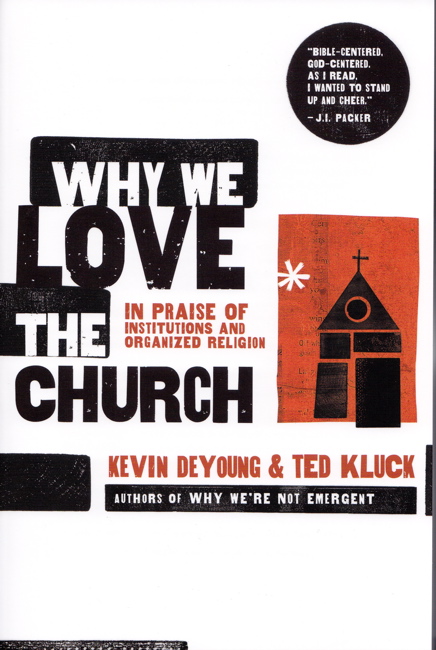 Why We Love the Church:
In Praise of Institutions and Organized Religion

Why We Love the Church: In Praise of Institutions and Organized Religion, by Kevin DeYoung and Ted Kluck. Published by Moody Publishers, 2009. Paperback, 234 pages, list price $14.99. Reviewed by OP minister Mark Jenkins.

As throughout history, the church of Christ is under attack. Governments around the world oppress it, Islam seeks to destroy it, and Americans are leaving it. While this third scenario hardly seems as dangerous or destructive as the first two, it is an attack, and it is growing in organization, artillery, and popularity. In their latest book, Kevin DeYoung and Ted Kluck seek to educate the people of God about the current church-leaving trend.

The book alternates between Kevin (a pastor) countering the most common reasons for people leaving the church from historical, theological, and pastoral perspectives, and Ted (the man in the pew) giving his "experiential" reasons why Christians should stay in their churches. It is a mix of treatise and autobiography, the logical and personal combined to persuade.

Before I get to the positive, there are two weaknesses of the book that need to be noted. In the first place, a basic matter of definition is not handled very well. DeYoung mentions, offhand, what he means by "church" in the introduction (p. 19), but this definition is not explained, and no argument is given for why it is the biblical definition of a true church. Leaving vague the qualities that make an organization a true church of Christ is not the best way to strengthen people's ecclesiology, and it may actually lead some to stay in "churches" they should leave.

Secondly, this work does not sufficiently address the basic assumption of the church-leavers that needs the severest critique: the idea that spiritual things are ultimately a matter of personal preference. While deftly challenging the sloppy thinking and rhetoric of the leave-the-church crowd, the authors' arguments often stop short of bringing the full weight of the Scriptures to bear. As a result, the book often reads more like a case for preferring church as the best biblical option than as a patent demonstration of its biblical necessity. This may be due to some difference in theological views between this reviewer and the authors, or it might be explained by their stated intention to present their case in a "pastorally sensitive and culturally savvy way." In any case, until American Christians stop letting personal preference and pragmatism govern their theology, we will not see true reformation.

I cannot conclude, though, on a negative note. So far, this review does not reflect the mass of approving marginalia scribbled throughout my copy of this engaging work. There is meat here. In fact, my criticisms could be regarded simply as points to address when reading the book for a Sunday school class or Bible study. I would especially recommend this book as a means of lovingly challenging the church-leaver or of encouraging the struggling church-cleaver (which we all are at times). Despite its few weaknesses, this Presbyterian closed it with a refreshed love for Christ's glorious body.