The Betrayal: A Novel on John Calvin 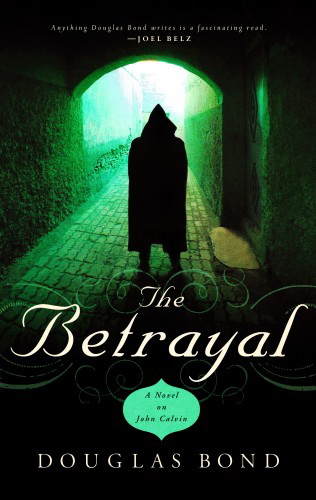 The Betrayal: A Novel on John Calvin

Reviewed by: Karl A. Bacon

"So ends the confession of Jean-Louis Mourin." This simple statement begins the final chapter of The Betrayal, A Novel on John Calvin, by Douglas Bond. Born in the village of Noyon in northern France, poor and envious Jean-Louis watches the finely dressed and privileged John Calvin excel in his studies at the grammar school. Twelve-year-old Calvin is set apart for the priesthood by the bishop of Noyon and begins to receive a substantial stipend as a boy chaplain.

Calvin travels to Paris to study at the Sorbonne and hires an ingratiating Jean-Louis as his personal servant. The new doctrines of the Reformers, which are spreading throughout France, are debated behind closed doors by Calvin and his friends. The prospect of being burned at the stake at the hands of King Francis I looms for all who subscribe to the "heretical" doctrine of salvation by grace alone through faith in Christ alone. Calvin becomes convinced of the truth of this new teaching while his trusted servant watches and listens, biding his time, surreptitiously gathering evidence and plotting how he might betray Calvin and his friends into the hands of the King's agents. Intrigue follows upon intrigue as Calvin goes first to Orleans to study law and then returns to the turmoil of Paris. When he becomes a hunted man, he flees to Switzerland.

Writing a first-person historical novel presents a set of unique challenges. Not only must the historical events be carefully researched and presented accurately, but also the character of the storyteller must be skillfully and seamlessly integrated into that historical record. In addition, a unique and personal voice for the storyteller, fitting for the era in which the story takes place, must be developed and consistently maintained throughout the novel. Bond carries all this off in a most engaging manner. Told by the servant Jean-Louis, who is a reliable and credible witness while at the same time demonstrating "an uncanny ability to be invisible," the story is a faithful retelling of the life of the great Reformer. Jean-Louis's manner of writing, through Bond, is at once familiar to modern-day readers, but at the same time employs certain words and turns of phrase that echo of antiquity, thus making the entire novel an engaging read and readily believable.

The Betrayal is a captivating story from which one may learn much about the life and times of John Calvin. Well researched and well written, it honors John Calvin and other early Reformers, but, more importantly, it honors Calvin's Savior, the Lord Jesus.