William the Baptist: A Classic Story of a Man's Journey to Understanding Baptism 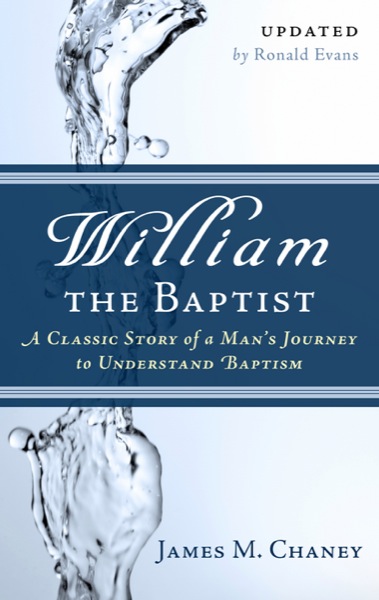 William the Baptist: A Classic Story of a Man's Journey to Understanding Baptism

If a Christian is new to the Reformed faith, the most difficult doctrine to accept is typically the Presbyterian understanding of baptism. In an evangelical world that is largely baptistic, most find it hard to understand how a minister could claim to believe the Bible and yet stand at the front of the church and sprinkle a baby. Ronald Evans has therefore done the church a great service by updating James Chaney's classic, nineteenth-century book on baptism.

William the Baptist is presented in the form of a dialogue between William, a passionate Baptist, and Rev. Cowan, a Presbyterian pastor. The result is a readable and appealing book that is very instructive.

The dialogue begins with the issue of the proper mode of baptism. William insists that in order to be baptized, one must be fully immersed in water; anything less is not a baptism. Rev. Cowan takes William to the Scriptures. He begins by showing that in the Bible the Greek word baptizo ("to baptize") does not mean "to immerse." He shows his friend how baptism is a sign of the cleansing work of the Holy Spirit, work that the Scriptures describe as both pouring and sprinkling. The actual baptisms recorded in the New Testament are examined.

Later in the book, the discussion turns to the subject of infant baptism. Rev. Cowan instructs William on the unity of the covenant of grace and the biblical command for children of believers to receive the sign of the covenant.

But there are some aspects of Chaney's work that are problematic. For example, he presents a truncated view of baptism by connecting it exclusively to the work of the Spirit. In trying to combat the burial theory of our baptistic brothers, he dismisses and downplays any connection of baptism to the believer's union with Christ (contrary to Romans 6, Colossians 2, and WCF 28.1).

Chaney argues that sprinkling (which he considers virtually synonymous with pouring) and sprinkling alone is the biblical mode of baptism. This view goes beyond historic Reformed belief as represented by its prominent theologians and confessions. The Reformed tradition has historically held that all three modes are acceptable, while often giving preference to sprinkling or pouring.

Despite these flaws, the book retains value as a readable source of biblical teaching on a topic that is misunderstood by many Christians.

In order to give the book a final test, this reviewer passed it along to a Baptist friend. After reading the book along with his wife, he described how their old assumptions about baptism were challenged from the ground up. They are now preparing to have their younger children sprinkled with the sign of the covenant!