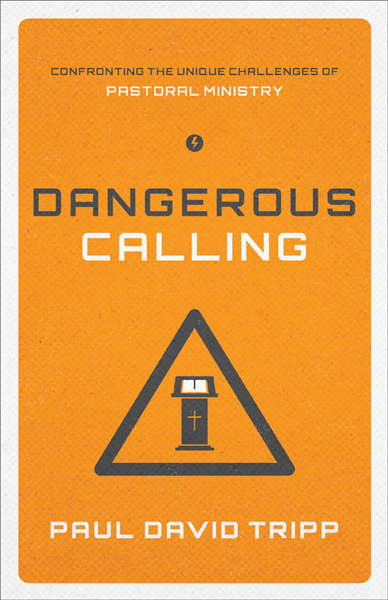 Dangerous Calling begins with the story of a pastor that is all too common. While this pastor's ministry appeared to be doing well, his success was illusory. The persona he projected toward his congregation was brazenly at odds with how he was behind closed doors. He was prideful, often said contemptuous things about those to whom God had charged him to minister, became dismissive of his wife's repeated warnings, and was growing increasingly distant from his family.

Who was this pastor that author Paul Tripp was describing? Paul Tripp. Through providential circumstances, he came to realize that he was not conducting his ministry in a godly manner. But through his many travels and classroom lectures, he discovered that many other pastors have the same struggles.

Here's the bottom line: because pastors are in the trenches, they don't get the spiritual nourishment that they are called to give to Christ's flock. Therefore, many are in survival mode, silently struggle with their own sins, and live in fear of their being discovered. These struggles can include having a seminary mind-set (i.e., valuing academics over ministering to people), being blind to their own heart issues, succumbing to isolation, and slouching towards mediocrity.

Tripp wrote Dangerous Calling to alert pastors to these very real dangers and to give them the tools to combat them—most particularly, regaining a sense of awe of God and his Word. In this book, he shows a compassionate tenderness toward pastors who are discouraged. Tripp reminds them of the great, merciful God they serve, and he tells them how to first feed themselves from God's Word before they feed their congregation.

While Dangerous Calling is geared toward pastors, it is also a useful tool for ruling elders, because it will help them to better understand and minister to their pastors. It will also help elders to better watch out for warning signs that their pastor may need help.

With so many pastors leaving the ministry every year, the publication of Dangerous Calling is a much-needed and timely book. All pastors, elders, and seminarians should read it carefully.