In Defense of the Descent: A Response to Contemporary Critics 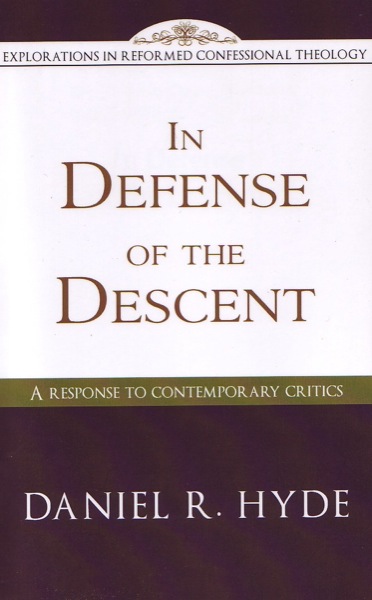 In Defense of the Descent: A Response to Contemporary Critics

As Christians, we are to confess with our mouths what we have first believed in our hearts (Rom. 10:9–10). That idea may give us pause when we recite in the Apostles' Creed, "He descended into hell." Do we really believe this, and if so, how do we understand it? Would things be simpler just to eliminate these words from the Creed? Reformed Christians may be especially confused, since the Westminster Larger Catechism and the Heidelberg Catechism interpret this clause in different ways. Daniel Hyde, a pastor in the United Reformed Churches, addresses such issues in this clear, concise, and helpful book. He argues that the debated clause not only belongs in the Creed, but also provides theologically rich, practical benefit to the church as she confesses it and teaches it.

Hyde begins by relating the objections of several contemporary Reformed authors to the use of this clause. He then provides some historical background on the development of the Apostles' Creed and the inclusion of the clause within it. In the lengthier third chapter, Hyde describes six main interpretations of the descent clause. The first four are non-Reformed: that Christ went to hell (1) to continue suffering, (2) to offer a second chance to those who died as unbelievers, (3) to announce his victory to those who died as believers, and (4) to announce his victory to Satan. Hyde briefly explains why the first two views are explicitly contrary to Scripture. He critiques the third and fourth views—typically espoused by Roman Catholics and Lutherans, respectively—in more detail. Here he includes helpful discussion of Ephesians 4:7–10 and 1 Peter 3:18–19, two texts that are commonly cited in this debate.

At the end of the third chapter, Hyde introduces the final two interpretations of the clause, which are common among Reformed believers: (5) that Christ was buried as one who was truly dead (see Westminster Larger Catechism, 50), and (6) that Christ suffered the agony of hell during his whole life and especially on the cross (see Heidelberg Catechism, 44). The fourth chapter defends both of these views. Hyde rightly recognizes that they are harmonious and, in fact, capture two aspects of the broader Reformed doctrine of Christ's humiliation. This chapter includes exegesis of Psalm 16:8–10, another historically important text for these debates.

In Chapter 5, Hyde concludes by discussing the benefits of retaining "He descended into hell" in the Apostles' Creed and in our catechetical training. This clause links us with the historic, catholic Christian church that has confessed it for so many centuries. Its truth also bolsters our assurance in times of doubt, provides hope in our suffering, and grants us peace as we face death.

This book is highly recommended, not only for those who may have objections to the descent clause, but also for any who wish to gain a richer understanding and appreciation for it. It will also be useful for those catechizing children. Its short length and clear writing make it accessible to a wide audience.