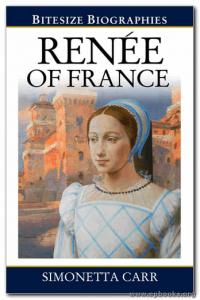 Renée of France was a French princess and Italian duchess during the Reformation. The endnotes of this biography for all ages reveal Simonetta Carr's thorough research.

As the religious sentiment in both France and Italy shifted between tolerance and persecution, both Roman Catholics, including her family, and the Reformers pressed Renée to use her noble status for their cause. Correspondence from Calvin reveals both his empathy for her plight and a strong personal connection, although they met only once. He encouraged her to face her adversaries boldly in defense of the true doctrines, particularly the Lord's Supper and justification by grace alone.

Renée was the only surviving child of King Louis XII. Her brother-in-law became King Francis I, because as a female she could not reign. Although her family was Roman Catholic, her governess, Madame de Soubise, was Reformed and became Renée's attendant when she moved to Italy as the wife of Ercole, the heir apparent of the prestigious Italian duchy of Este. She also corresponded with the Reformed Marguerite of Navarre. Renée maintained her court as both French and Reformed and harbored persecuted French Protestants. When Ercole became duke in 1534, political and papal pressure made him less tolerant of Renée's practices.

About two years later, Calvin visited her and followed up through the years with letters and pastors. Unfortunately, advice in her court varied from encouraging her to outwardly participate in the Roman Mass to boldly proclaiming her Reformed beliefs.

Carr notes that Renée's most valuable contribution was as a patroness. In 1540 Ercole tried to alleviate criticism from local papal authorities by giving Renée a villa fifty miles away. There she was free to host ministers, collect Reformed writings, provide refuge for Huguenots, and financially support Reformers. Eventually Ercole confiscated this and imprisoned her in his palace, where she succumbed to intense Jesuit pressure to renounce her heresy, but never to the complete satisfaction of the authorities.

Renée returned to France when Ercole died. Although Calvin feared she valued her properties over her heavenly inheritance, she used a castle given to her as a wedding gift from King Francis I to establish a Protestant haven for refugees of the religious wars. She provided schooling, safety, and medical care for hundreds, including Jeanne d'Albret and her son.

Carr recounts Renée's struggle to practice her faith amidst a clash of pressures. Theodore Beza saw her as weaker than Queen Marguerite of Navarre (who married a royal Protestant) or their daughter Jeanne d'Albret (who declared Navarre Protestant when she was crowned in 1560). In contrast, Renée, having no politically powerful Protestant advocates, relied on the tolerance of her Catholic family, whom she loved—Calvin saw this as hindering reason and truth. Although at times she outwardly bent to intense pressure, her final will gave glory to God and humble thanks for preserving her faith.

Carr shows Renée's struggles with the things of this world, but also reveals how she used her position and possessions to support the Reformation.