The Question of Canon: Challenging the Status Quo in the New Testament Debate 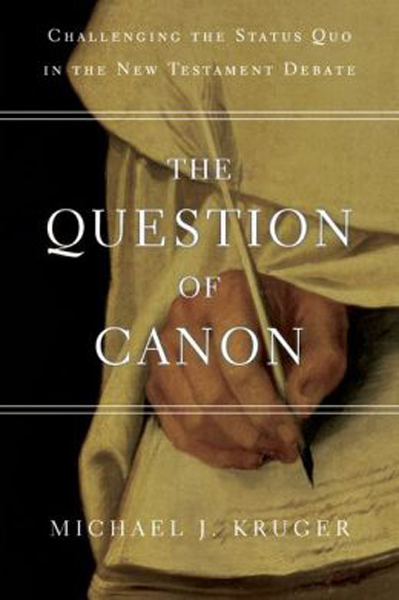 The Question of Canon: Challenging the Status Quo in the New Testament Debate

Why does our New Testament contain certain books, but not others? Indeed, why is there a New Testament at all? The dominant view in (largely non-evangelical) academic circles today is that the ancient church gradually decided to invest certain writings, but not others, with an authoritative status alongside its Old Testament inherited from Judaism. Taking issue with this view is Michael J. Kruger, who teaches at (and is now the president of) Reformed Theological Seminary in Charlotte, North Carolina. He does so with clarity, cautious conviction, and a command of the issues in The Question of Canon.

Kruger grants that "it took time" ("several centuries," in fact) for this new collection of sacred books "to be developed and shaped" (p. 20). But he puts forward the view, not original to him, that canonical authority was not "imposed from the outside" on the New Testament writings (the "extrinsic model"), but developed "more organically from within the early Christian religion itself" (the "intrinsic model") (p. 21). He argues that the five major, generally held tenets of the extrinsic model are "problematic" (pp. 23, 209). He does not deny that the process of canonization was "a long, drawn-out process" (p. 21), but he recommends his intrinsic model for consideration as a corrective to the extrinsic model.

In each of his five chapters, Kruger takes on one of the five basic arguments for the extrinsic model. First, we should recognize that Christians accepted the various books of the New Testament as "canonical" in the sense of "authoritative" long before the church (i.e., the ecclesiastical authorities) settled on a final, closed list of them. Second, certain theological beliefs of the apostolic church anticipated the development of a canon of apostolic writings. Third, while most early Christians were illiterate, they nonetheless valued, and had knowledge of, written texts. Fourth, the New Testament authors presented their writings to the church as authoritative documents. Fifth, many New Testament books were regarded as Scripture by Christians much earlier than is often acknowledged. Kruger makes a strong, thorough case that will have to be reckoned with.

In his conclusion, Kruger modestly concedes that his critique of the extrinsic model does not prove his intrinsic model (pp. 209–10)—but what other option is there? He simply asks for a "fresh look" at the question. He insists that the intrinsic model is not tied to an evangelical doctrine of Scripture, for it only asserts that the New Testament canon arose "naturally within the first few stages of Christianity" (p. 210; see also pp. 79 and 118). However, a close inspection of what happened "naturally" will bring the supernatural clearly into view. Kruger has already done that in Canon Revisited (Crossway, 2012), an excellent introduction to New Testament canonicity.