Reading for Preaching: The Preacher in Conversation with Storytellers, Biographers, Poets, and Journalists 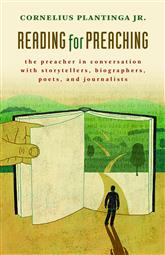 Reading for Preaching: The Preacher in Conversation with Storytellers, Biographers, Poets, and Journalists

This book is an adaptation of the 2012 Warfield lectures that Dr. Plantinga delivered at Princeton Theological Seminary. He urges preachers to read literature—not merely as an end in itself, but also as a means to the end of preaching well. Language is to a preacher what boots are to a hiker—an essential tool for success. Yes, the Holy Spirit is necessary to someone believing a sermon, but skillful expression is necessary to someone understanding it, and no one can believe a message he cannot comprehend. Plantinga is surely right: "Good reading can tune the preacher's ear for language, which is her first tool. A preacher who absorbs one poem a day will tune his ear, strengthen his diction, and stock his pond with fresh, fresh images" (p. x; yes, Plantinga intentionally alternates the male and female pronouns when referring to the preacher throughout the book, as he explains on p. xiv).

This book is not a "cultural literacy" list (à la E. D. Hirsch, Jr.), though a nice list of recommendations is included at the end (pp. 127–30). This book is much more about why preachers should read than what they should read. Plantinga assumes (and applauds) that preachers will read theology ("The preacher's daily bread is Scripture and Scripture scholars," p. 10). He challenges them to augment such reading with nontheological literature, and each chapter is a link in the chain of his compelling argument. The introductory chapter is followed by chapters on how good literature cultivates diction and provides ready illustration (chapters 2 and 3). More interestingly, Plantinga argues that nontheological literature contains a rich mine of wisdom, both general (chapter 4) and specific (chapters 5 and 6: wisdom regarding how varied and particular life is, and wisdom about the paradox of sin and grace). This brief book is rich in insightful comments, often memorably expressed.

I wish this book had been available when I wrote Why Johnny Can't Preach (2009), in which I attempted to make a similar case in my final chapter. I may have persuaded no one, and perhaps Plantinga will not do so either. More likely, Plantinga's book will encourage and reenergize those who are already at least semiconverted. They will return to literature with greater zeal and less guilt, and thus to their pulpits with renewed vision and refined diction, just as they did when they first read C. S. Lewis's An Experiment in Criticism (1961), which reads like a first cousin to Plantinga.

For those who are tempted to dismiss Plantinga's apologetic for literate preachers, I would gently remind them that Scripture itself regards skillful language with glowing praise: "A word fitly spoken is like apples of gold in a setting of silver" (Prov. 25:11). The sermons of those who embrace Plantinga's vision will surely be more fitly spoken.