Luther on the Christian Life: Cross and Freedom 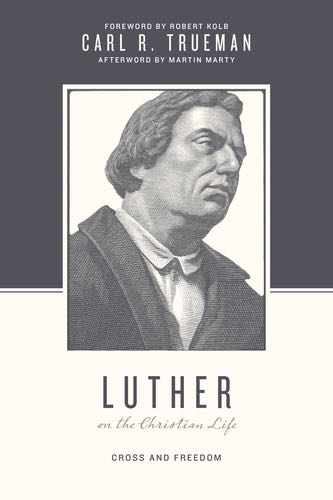 Luther on the Christian Life: Cross and Freedom

Martin Luther is a character from church history who is bound to come up in conversations about the Reformation or justification. He is one of those historical figures of whom one needs to have a basic grasp. Yet Luther is very complex. This is why Carl Trueman's Luther on the Christian Life is such a great book.

Trueman provides a lens for the modern interpreter to understand Luther's life and thought. His book begins in the first chapter by walking the reader through the life of Luther to provide the context for his thought. The subsequent chapters move into the thought and theology of Luther, showing how his views progressed over time. Trueman relates each topic to the Christian life.

One might assume that a book on Martin Luther would deal primarily with justification by faith. However, this work focuses on Luther's views on the Word and the sacraments. In fact, three of the eight chapters are devoted to his views on the Word of God. One chapter discusses Luther's view of the Mass, but his view of the sacraments trickles throughout the book. Also important in the portrayal of Luther's thought is the distinction between theologians of glory and theologians of the cross. These concepts are set in the proper context of what Luther meant by them.

This book is commended for three reasons. First, it introduces many of the key writings of Luther. On multiple occasions, the reader is told that Luther valued On the Bondage of the Will and his catechism above all his other works. This tells the selective reader where to go first. In addition, this book helps the reader to understand Luther's earlier works in light of later developments in his thought. This is helpful to those who will not be able to read all of his works.

This book is valuable, secondly, because of the pastoral advice it offers. It is part of a series that focuses on the contributions of historical figures to the Christian life. While modern Christians in general are challenged, Trueman has much to say specifically to ministers. This advice ranges from how to preach to how to relate to one's family.

The third value of this book is the example its author provides of how to relate to those with whom one is not in full agreement. The author is a Presbyterian writing on a Lutheran. There are some strong and important disagreements between their perspectives. But even in the disagreements, there is the possibility of being sharpened and challenged within one's viewpoint, as Martin Luther has sharpened and challenged the author.