The Flow of the Psalms: Discovering Their Structure and Theology 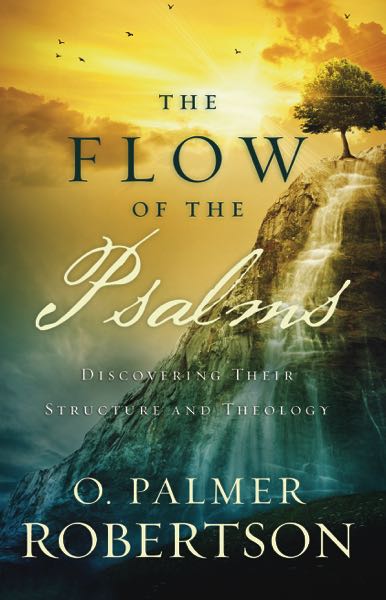 The Flow of the Psalms: Discovering Their Structure and Theology

Most studies of the Psalter for centuries focused on understanding the meaning of individual psalms apart from the psalms that appear immediately before or after the one under consideration, let alone the book in which a particular psalm appears (there are five “books” in the Psalter). Then along came Herman Gunkel (1862–1932) and Sigmund Mowinkel (1884–1965), and the focus switched to genre identification as the key to understanding individual psalms. Recently, however, another approach has become important: finding an organizational structure within the Psalms and trying to understand the editor(s)’ theological intentions for organizing the Psalter as a whole. Robertson has written a book attempting to engage this approach.

Robertson sets out the two “poetic pillars” of the Psalter: Psalms 1 and 2, whose themes permeate the rest of the Psalter. Next he sets the redemptive-historical framework of the Psalter. Those familiar with Robertson’s views on covenant theology will recognize many themes here. The subsequent chapters cover each book of the Psalter, respectively, with its major theme: Book I of the Psalter (Pss. 1–41) is about confrontation. Book II (Pss. 42–72) is about communication, especially with peoples outside Israel. Book III (Pss. 73–89) is about devastation and exile. Book IV (Pss. 90–106) is about maturation after exile. Book V (Pss. 107–150) is about consummation.

In the final chapter, Robertson makes some concluding observations and includes helpful explanations of the colorful charts he has supplied at the end of the volume.

The book has several strengths. To the publisher’s credit, no spelling, typographical, or syntactic errors were found in the entire book. Robertson’s canonical and theological analysis raises many fresh questions that might not be otherwise asked. Theological and literary insights abound throughout the book.

There are some weaknesses in the book as well. For example, some bibliography I expected to see referenced in such an ambitious undertaking is missing. Most of the major secondary literature touching on his topic is there, but important monographs and articles published in the last decade are missing. Secondly, some of Robertson’s applications to the personal piety of individual believers are unpersuasive to this reviewer. For example, he contends that “the believer must learn to pray his own first-person prayers in the same way as David” (pp. 65-66), which basically means that our petitions must always aim at the corporate well-being of the people. Although individual believers living in the age of the new covenant should always be concerned about the corporate well-being of the people of God, Robertson’s approach seems to minimize the unique role of David as a type of the messianic King. In other words, these prayers of David often say something first and foremost about the prayer life of the coming greater son of David, Jesus Christ.

Despite these slight shortcomings, the book is to be commended for its careful attention to many details in the Psalter. It is an edifying read, and this new volume deserves a significant readership.