Come to the Waters: Daily Bible Devotions for Spiritual Refreshment 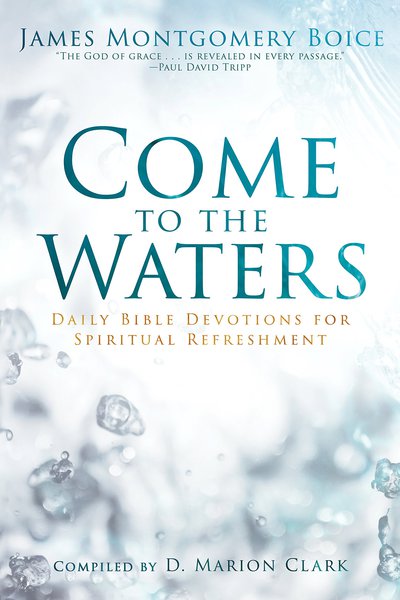 Come to the Waters: Daily Bible Devotions for Spiritual Refreshment

Dr. James Montgomery Boice was the pastor of historic Tenth Presbyterian Church in Philadelphia for over thirty years. His devotional, Come to the Waters, was compiled by D. Marion Clark, who served as executive minister at that church. Material was drawn from Boice’s published, unpublished, and unpreached sermons, his articles, and his commentaries. The devotional follows the order of the books of the Bible, giving the reader a sense of the unfolding of revelation. Rather than offer a few verses as a springboard for devotional reflection, Boice’s thoughts are tied to longer passages, providing a context for his comments.

Boice uses his knowledge of biblical languages and the finer points of grammar to draw out the desired truth, for example, the meaning of Jacob’s name change (1/23); and he points out the exegetical significance of the absence of a definite article in Greek to drive home a theological point (11/4). He is aware of textual variants (7/20). The ESV is used generally, but the KJV and the NIV are cited as well. Boice offers his own translation of Jeremiah 31:18 (7/3).

He displays a rich knowledge of church history and uses little-known stories of the saints to illustrate his points (7/25, 10/18). He cites and contrasts secular philosophy with Bible doctrine and brings that contrast to bear on the applications of the truths he is teaching (9/26). He mentions the work of Shakespeare (8/17); quotes from Greek and Egyptian mythology (8/18, 1/25); and reveals his knowledge of hymnology (5/29).

Though his scholarship is apparent, so is his pastor’s heart. Boice leads his readers, as he led his hearers, to Christ. His exhortations reflect Paul’s words to Timothy: Scripture is profitable for teaching, reproof, correction, and training in righteousness. “Head knowledge is not enough (10/13).” He emphasizes that Christians are in a spiritual battle and should be on alert against Satan (9/20).

His remarks throughout lead to a personal call and challenge. Routinely, the reader will meet with an appeal to turn to Christ and will not read far before confronting a summons to repent and believe the good news. The reader is directed to actions that conform to biblical thought. There is a constant call to self-examination in light of God’s holy Word. At some points, Boice simply provides straightforward advice. His reflections are seasoned with personal anecdotes (11/12) that make familiar passages refreshingly new.

There are fifty-two devotionals on the Psalms, fifty-five on the Synoptics, and thirty-eight on John’s Gospel alone, with twenty-one on the book of Romans. There is one devotional on Proverbs, Ecclesiastes, Jeremiah, Ezekiel, and 1 Timothy, and surprisingly, only four on Isaiah, but six on Hosea. Omitted are comments on some very well-known Scriptures.

Endnotes for each day’s devotional identify the source material used. An index is also included.

Dr. Boice composed a song to which he gave the same title as the book. It is based upon Christ’s invitation to come and to drink the water of life freely. The song appears at the conclusion of the daily readings.

I found these devotional readings inspiring, refreshing, and enjoyable. They are valuable also as starting points for preparing studies, sermons, or talks. I would like to have seen a suggested prayer at the end of each day’s devotional; devotional thoughts should move one to worship. That aside, I recommend this volume without reservation.