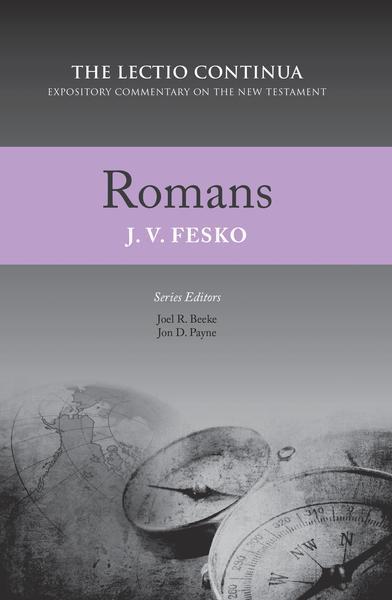 J. V. Fesko’s new Romans commentary is in The Lectio Continua Expository Commentary on the New Testament series, a series comprised of non-technical, expositional sermons written from an unabashedly Reformed perspective. (The series uses either the King James or New King James translations of the Bible.)

As Fesko notes, Paul does not explicitly state why he wrote Romans, although Fesko sees Romans 1:16–17 as a kind of theme statement for the whole letter, arguing that Paul’s chief purpose is to unpack the “power, scope, and nature of the gospel” (23). And the gospel is this: “the righteous shall live by faith,” a faith that

is both the exclusive means by which we receive the imputed satisfaction, righteousness, and holiness of Christ, and the lens through which we must live our entire lives. (30)

For those whose own theological perspective is Reformed there are few surprises in Fesko’s reading of Romans. What perhaps distinguishes this commentary most is its welcome concern to apply the text to the heart as well as the mind, seen, for example, in Fesko’s treatment of hypocrisy and pride in Romans 2:17–29 and his discussion of hardship and suffering in the life of the believer in Romans 8:18–25.

It may be most helpful to interested readers to note a few areas where Fesko takes a view that is contested by modern interpreters.

Fesko straightforwardly expounds Paul’s prohibition against homosexual desire and activity in Romans 1:26–27. With regard to Paul’s teaching that God “will render to each one according to his deeds” (Rom. 2:6) and that “the doers of the law will be justified” (Rom. 2:13), Fesko takes the position that such statements hypothetically lay out the law of God to send lawbreakers to Christ (47–52).

In chapters 9 and 10 (on Rom. 3:21–31 and 4:1–8), and throughout the commentary, Fesko clearly articulates Paul’s teaching that Christ’s death accomplishes a penal (judicial) substitutionary atonement for his people that turns God’s righteous wrath away from them. Justification is thus a forensic (legal) declaration that one is in the right with God, a verdict grounded solely in the imputed righteousness of Christ.

In chapter 10 (on Rom. 5:12–14), Fesko provides a classic Reformed defense of “federal theology.” On the long-simmering debate among modern Reformed theologians about the relationship among union with Christ, justification, and sanctification, Fesko maintains that because justification is a judicial verdict that “breaks the legal claim and power of sin” (162), it is “a life-giving verdict” (160). While explaining union with Christ in Romans 6, Fesko emphasizes that Paul lays out the legal, rather than transformative, dimension of this union (see, for example, 169; Fesko has elsewhere argued against the notion of “definitive sanctification” in Paul’s theology). How, then, does sanctification take place? The believer

Fesko elsewhere emphasizes that the strength to pursue progressive sanctification lies in the fact that the believer is a participant in the new creation, and that the Holy Spirit is actively at work subduing the sinful flesh of the believer. On the identity of the “I” in Romans 7:13–25, Fesko, in agreement with an increasing number of Reformed scholars, contends that Paul is not writing about himself (before or after conversion), but about “Israel’s collective experience under the law” (182).

In sum, Fesko has written a straightforwardly Reformed commentary that is focused on the meaning of the text as well as its application to the hearts and lives of believers. Pastors and laypeople will benefit from his exposition.