The Devil’s Redemption: A New History and Interpretation of Christian Universalism 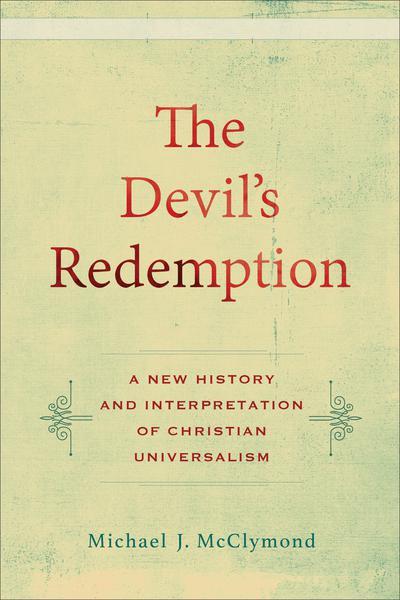 The Devil’s Redemption: A New History and Interpretation of Christian Universalism

Universalism, the teaching that everyone will ultimately be saved, especially looms in our day. Many cannot stomach the notion of anyone going to hell for eternity. Maybe Hitler, but certainly not “the good people that I know.” Thus Rob Bell and many others proclaim that “love wins,” meaning that it must turn out all right for everyone in the end. Neither the Bible nor the Christian church in its creeds or confessions has taught this, however.

Michael J. McClymond (professor of modern Christianity, Saint Louis University), in this thorough examination of Christian universalism, looks at a host of thinkers—from Origen and before to Barth and after—who’ve asserted that Christianity teaches the salvation of the whole human race.

While there were Jewish and gnostic universalists before Origen, it is Origen’s form of universalism that is best known: apocatastasis, which posited the salvation of all ultimately, including the devil himself. Origen had enormous influence, though his universalistic teaching was condemned around the time of the Second Council of Constantinople (AD 553; whether the condemnation was a conciliar decree is disputed). Gregory of Nyssa, the younger brother of Basil of Caesarea, imbibed the doctrine, though arguments abide over whether their friend Gregory of Nazianzus embraced universalism. Many of the church’s theologians (Augustine, Gregory the Great, Maximus the Confessor, Aquinas, etc.) have expressly refuted Origen.

McClymond fairly treats the proponents of universalism at length before arguing in his concluding chapter in the second volume that Christian universalism not only undermines the character of God and exacerbates the problem of evil (and justice), but sidelines grace and faith and undermines hope, which only particularism secures. Grace, as God’s unmerited, free favor, does not exist in any form of universalism, which either ignores or radically reinterprets the Bible in favor of its own metaphysical constructs. Universalism, in all its forms, privileges an abstract notion of love and the ultimate unity of all things, putting its Hegel-like insistence on harmony always at the forefront. The Bible’s doctrine of love and salvation in Christ actually offers hope, where universalism is simply wishful.

It is the case that some of the church’s greatest speculative thinkers (Origen and Nyssa would be among them), who did not stick close to revelation (as, say, Calvin did), tended in the direction of universalism. John Scotus Eriugena, G. F. W. Hegel, Karl Barth, Jurgen Moltmann, and many other moderns have tended in this direction. There is an undeniable attractiveness to this way of thinking; it must be thoroughly rejected, however, as it has no biblical support.

The Westminster Confession of Faith is especially alert to this error, perhaps surprisingly so, to any who consider universalism a particularly contemporary error: WCF 10.4 calls the notion that any can be saved outside the Christian religion, which would condemn more than universalism but not less, “very pernicious and to be detested.”

“Some today,” McClymond laments, assume that “God’s ‘job’ is to get everyone to the heavenly ‘finish line’—otherwise it is not humanity but God who has failed” (1.19). Every ministerial student, preacher, and interested layperson should welcome this volume that shows instead how thoroughly all forms of Christian universalism have failed.