A Fiery Gospel: The Battle Hymn of the Republic and the Road to Righteous War 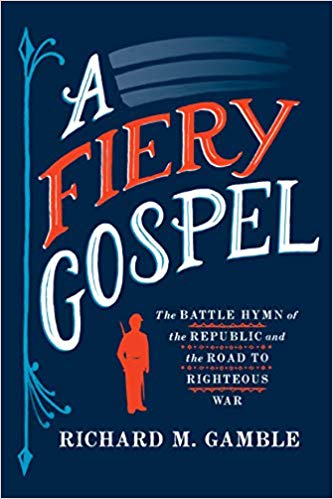 A Fiery Gospel: The Battle Hymn of the Republic and the Road to Righteous War

At first blush one might wonder: how could someone write an entire book about a national hymn written during the American Civil War? Yet consider that song’s success. It has been sung from campfires to cathedrals; revived for nearly every American conflict from the Spanish-American War to the War on Terror; sung at state funerals and at the conventions of both parties; included in hundreds of hymnbooks from essentially all denominations and sects; sung by congregations, Elvis Presley, the Russian Army Chorus, and was a chart-topping hit for the Mormon Tabernacle Choir in 1959; invoked by writers as disparate as William Jennings Bryan and Saul Alinsky; and woven into sermons by preachers as theologically distant as the Unitarian James Freeman Clarke, revival evangelist Billy Sunday, and modernist Martin Luther King Jr., who quoted the hymn in closing his final sermon preached the night before his assassination.

Gamble’s goal is larger than a record of the song’s wide embrace. He uses this history to explore the topic of religious nationalism—the extolling of the nation by the use of the language of redemption. “The Battle Hymn of the Republic” is a near-perfect exemplar of this.

Much of the book centers on the poem’s author, Julia Ward Howe. The wife of physician and social activist Samuel Gridley Howe, Julia was a prominent and accomplished woman: intelligent, well read, a published poet and essayist. By the time of the civil war she was identified with the animating currents of New England progressivism. Though raised an Episcopalian, by young adulthood she was a liberal unitarian, ardent abolitionist, and would later champion women’s suffrage. In November 1861, she was forty-two years old when she penned the words at the Willard Hotel while visiting war-time Washington DC.

Her poem is often described as biblical or even Christological. The language and imagery certainly are. Howe evokes Genesis, the Psalms, Isaiah, and Revelation. Jesus is present explicitly and implicitly. Yet, for all this biblical language, the poem was written to advance a cause very much of this world. Yet here is this striking feature, and a key to the work’s longevity: that cause is never explicitly named.

Howe’s poem wraps biblical language around the issue of her times. Anyone hearing the song in the 1860s—set to the tune of the abolitionist song “John Brown’s Body”—knew the “watch-fires of a hundred circling camps” were those of the Union Army and that, when exhorted to “die to make men free,” the freedom in view was from Southern slavery. Yet, the lack of lyrical specificity—no mention of the Union, the South, Lincoln, or even slavery—allowed the poem to find easy application in very different times and settings. In whatever campaign it is sung, that cause is equated with the gospel and its opponents are placed under the anathema of God. Set to a rousing, martial tune, this made the song not only wildly popular for its natal war but allowed it to be adopted by a dizzying array of later causes, including wars foreign and domestic and movements for temperance, women’s suffrage, civil rights, and more.

This book’s goal is not simple history but a word of caution. Undoubtedly, some things have been gained by the fusion of religion and nationalism (or social activism). Causes have been advanced, people rallied. Yet what is lost or endangered? What is damaged when the people of God allow, even endorse, the use of the language of heaven in the causes of the world? Surely both kingdoms are ill- served.