The Surprising Work of God: Harold John Ockenga, Billy Graham, and the Rebirth of American Evangelicalism 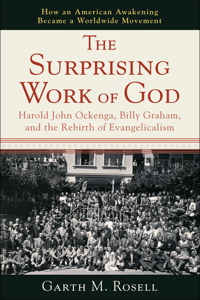 The Surprising Work of God: Harold John Ockenga, Billy Graham, and the Rebirth of American Evangelicalism

What might have been. Harold John Ockenga (1905-1985) was reared a Methodist and attended Taylor University (an institution with Wesleyan ties). But at a time when fundamentalism appeared to be a common cause that was enlisting conservatives across denominational lines in opposition to modernism, he enrolled at Princeton Seminary and then, after Princeton's reorganization in 1929, followed J. Gresham Machen to Westminster Seminary. In 1931, he became a pastoral assistant to the popular Clarence Macartney at First Presbyterian Church in Pittsburgh. But in the same year that the OPC was formed (1936), Ockenga received a call to Park Street Congregational Church in downtown Boston, and he left the orbit of confessional Presbyterianism.

The rest is history. Instead of becoming a leader among conservative Presbyterians, Ockenga went on to be arguably the most important institution builder within the neo-evangelical movement. He was the founding president of the National Association of Evangelicals (1942) and the founding president of Fuller Theological Seminary (1947), all the while remaining the full-time pastor at Park Street and a nationally recognized speaker who was in constant demand. In retirement, Ockenga became the president of Gordon College and Divinity School in 1969, and he oversaw the merger of Gordon Divinity School with Conwell School of Theology to form Gordon-Conwell Theological Seminary.

Garth M. Rosell's book is one part biography of Ockenga and one part history of the neo-evangelical movement. He sees a basic continuity from Jonathan Edwards and George Whitefield to Harold John Ockenga and Billy Graham. He seldom observes missteps by evangelicals or the movement. The author is not always successful in tying the threads of his narrative together, but he is a reliable guide to an older understanding of evangelicalism before the mid-to-late 1970s, when controversies over inerrancy, complications from church growth and megachurch strategies of outreach, and emergent movements unraveled the consensus that leaders like Ockenga and celebrities such as Graham cultivated.

Orthodox Presbyterians would likely not always call it the way Rosell sees it. Not only were faculty at Westminster dubious about Fuller Seminary's ability to stand for historic Christianity on a reduced creedal platform and with close ties to the PCUSA, but the OPC declined invitations to join the National Association of Evangelicals because of neo-evangelical leaders' indifference to the doctrines of grace. At the same time, the OPC experienced numerous controversies within her own ranks, thanks to those who wanted the denomination to be part of the neo-evangelical effort to renew America and recover its Christian heritage.