The Doctrine of the Word of God 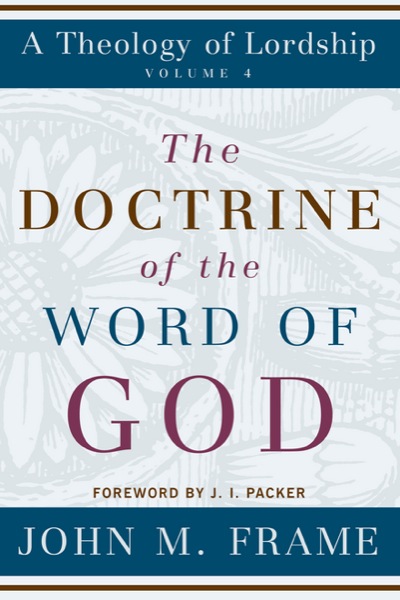 The Doctrine of the Word of God

The fourth and probably final volume of John Frame's series, A Theology of Lordship, has now been published: The Doctrine of the Word of God. This is an important work, but it is not as monumental as its number of pages might suggest. The latter half of the book consists of seventeen appendixes, which are short pieces (including book reviews), mostly published previously, on the general subject of the book.

The main portion of the book (pp. 1–334) was developed over a long career of seminary teaching. It sets forth the rich teaching of Scripture about God's speech (especially in Scripture), and is replete with Bible references.

Frame treats his subject in forty-six chapters, but chapters averaging seven or eight pages cannot say much. Frame himself states that this introductory volume is "a more concise version of what I had originally hoped to write," a mere "summary" with "relatively few citations of historical and current writers," which (health permitting) he may expand in successive editions or supplement with "an additional book or two" on the subject (pp. xxvii–xxviii, 7). Nonetheless, it is a valuable treatment of biblical teaching, with Reformed moorings and a solid commitment to the authority of Scripture.

"My main thesis," Frame says, "is that God's word, in all its qualities and aspects, is a personal communication from him to us" (p. 3). His book is an exposition and defense (from Scripture) of this "personal-word model." This sounds self-evident to the Christian believer, but will evoke disdain from much of the academic world. But Frame recognizes that God's communication is "supernatural all the way through," and that only the Holy Spirit can "bring persuasion" to his position (p. 7).

Not surprisingly, Frame brings his triperspectivalism to this volume—though it figures less prominently than in earlier volumes in this series. For example, he looks at liberal views of revelation from "my three perspectives, normative, situational, and existential" (p. 21). There is some usefulness to such an approach, but it can lead to some artificial analysis. Thus, he "takes some liberties with the traditional list" of the attributes of Scripture "to align" them with "God's lordship attributes of control, authority, and presence" (p. 201)—admittedly "stretching the scheme slightly" (p. 210).

His equating of the word of God with God (p. 48) is, in my judgment, mistaken, based on superficial exegesis of John 1:1 and other passages. If the biblical text is the word of God, and thus God, shouldn't we fall down and worship our Bibles? Frame of course says no (p. 67), but why not? It is likewise imprecise to speak of God's word as an "attribute" of God (as on p. 71 and elsewhere).

For the most part, though, Frame propounds, in his own way, traditional Reformed doctrine. He has excellent chapters, for example, on "The Inerrancy of Scripture," "The Phenomena of Scripture," and "Assurance."

Frame's writing is clear, almost conversational, being neither pedantic nor pretentious, and always engaging. One need not be a professional theologian, or even a seminary student, to think along with him. I have some disagreements with him, but I would nonetheless recommend this book to people interested in studying the full breadth of the doctrine of the word of God.