Pocket Dictionary of the Reformed Tradition 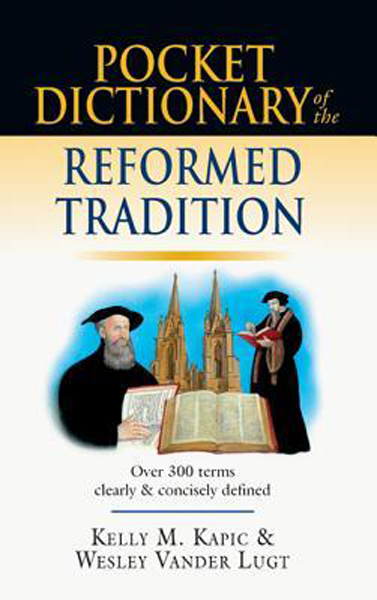 Pocket Dictionary of the Reformed Tradition

This book appears to build on an earlier pocket dictionary published by InterVarsity Press (Pocket Dictionary of Theological Terms, 2010). Kapic teaches at Covenant College and Vander Lugt is an EPC pastor in North Carolina. Such condensed dictionaries might have been more helpful in the pre-Internet age, but I can still see a reason for them today. The book under review here provides a reasonably comprehensive and pointed description of major topics and actors in the Reformed tradition. I have found it enjoyable as a learned, accurate, and readable review of things that matter to me, and I could see it as a resource for a pre-seminary course on the Reformed tradition. Pastors and others already familiar with this tradition, who possess some critical ability, may find that the Internet is now a sufficient resource for the fingertip information in view here. On the other hand, it is helpful to have a single work that has a consistent format and perspective and that is sufficiently broad to be informative. The book is generally cautious theologically, though I would say it is too cautious regarding neo-orthodox theologians like Barth.

When it comes to choosing entries that define the "Reformed tradition," it is hard to be neutral. The term "Reformed" can be used more broadly as a historically descriptive term, or as a more ideal conception (Reformed orthodoxy). This book properly includes entries for both orthodox and heterodox names and ideas (e.g., Machen to Barth). This makes it useful outside one particular Reformed community. In a few cases, I might have selected different entries. For example, there is an entry on "Federal Vision" (noting its "controversial perspectives"), but none on New Perspectives on Paul. My impression is that FV as a movement on the world stage is more parochial than NPP. In the name of principled parochialism, however, I would have been less sanguine about Karl Barth and related theologians; I would at least have added the term "controversial" (as with the FV entry). Although a dictionary is not a work of polemic theology, red flags serve a useful purpose in terms of the kind of canon I would choose for describing the Reformed tradition. Also, I would prefer describing "penal substitution" as a "doctrine," rather than as a "theory" of Christ's atonement. There being no entry for the "Auburn Affirmation" makes the decision to use of the word "theory" curious to me. There is an entry on "propitiation" that fairly implies that there are some historical differences of opinion about the atonement that come up in the Reformed tradition.

I have a few lesser quibbles. For the entry on "Old School Presbyterians," I would have left out the first professor at Princeton Seminary, Archibald Alexander, and would have substituted someone like R. J. Breckenridge or Ashbel Green. For the entry on "New School Presbyterians," I would have mentioned Albert Barnes. I think this pocket dictionary remains useful considering its price, pithiness, overall accuracy, and coherence—my quibbles notwithstanding.