The Godly Shepherd Chronicles: The Pilgrimage 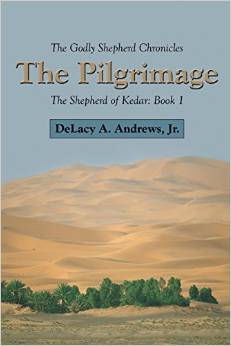 The Godly Shepherd Chronicles: The Pilgrimage

In his first novel, DeLacy Andrews (regional home missionary for the Presbytery of the Southeast) has given us a story worth reading about a righteous Jew, a shepherd, longing for the Messiah.

In this work of historical fiction, we meet Josiah, a Jew living in Kedar, far from the Promised Land. Psalm 120:5–7 sets the backdrop for the novel:

Woe to me, that I sojourn in Meshech,
that I dwell among the tents of Kedar!
Too long have I had my dwelling
among those who hate peace.
I am for peace,
but when I speak, they are for war!

Andrews weaves a tale of friendship, blossoming love, murder, heartbreak, spiritual rebellion, and redemption. We get to know Josiah and his wife Deborah, who love the Lord and his Word. Amid the daily routines and challenges of life, they prayerfully labor to instill their deep-seated faith in their eleven children.

The Songs of Ascents, Psalms 120–134, are a focal point of their family worship as they prepare to make a pilgrimage to Jerusalem for the Passover. Josiah and his older sons ponder the texts of Scriptures and discuss them with others within their tribe. As they make their pilgrimage, they meet others with whom they discuss the Scriptures. Questions about the messianic implications of the texts begin to trouble Josiah more and more.

Josiah has not been to Jerusalem in thirty years. His only other pilgrimage took place when he was a boy of ten. An incident in the temple during that pilgrimage has stayed with him and puzzled him all through the intervening years.

The Pilgrimage ends before the object of the family's pilgrimage is realized, but you don't have to be kept in suspense. Book 2, Ascending Mount Zion, has already been published. (Four books are intended in this series.)

One of the strong points of the book is the biblical-theological approach to the Hebrew Scriptures that begins to inform Josiah's understanding. Andrews does a good job of giving us a window into the inner turmoil that a God-fearing Jew might have had as he wrestled with integrating in one person the texts that speak of the coming Messiah.

The character development is reasonably well done. Each lead character has his or her own personality, and each one's interactions fit with that personality. For my taste, though, too much of the personalities is revealed in character descriptions, rather than in their interactions.

Overall, the historical details seem accurate. I do wonder, however, about the number of scrolls of Scripture that Josiah owns. Even though he does not possess the whole of the Hebrew canon, and even though some of the scrolls have been handed down in his family, acquiring them would have been a very costly endeavor.

The Pilgrimage (and Ascending Mount Zion) is interesting, imaginative, and reasonably well written. It is suitable for both teens and adults.