A History of Western Philosophy and Theology 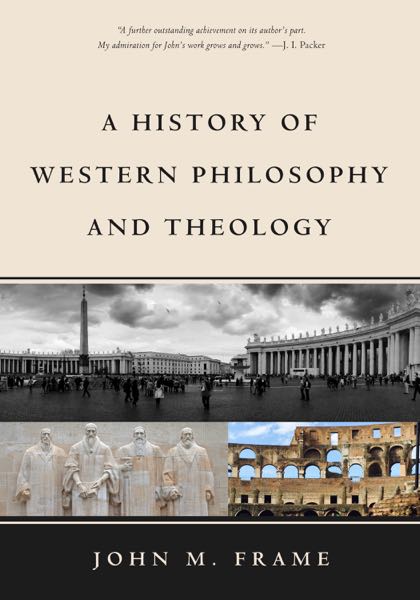 A History of Western Philosophy and Theology

The apostle Paul reminded the Corinthians that the Body of Christ wages spiritual warfare with spiritual weapons. But what it looks like to “take every thought captive to obey Christ” in that battle challenges every generation of believers. The church can never rest comfortably in the assumption that it has destroyed every “lofty opinion raised against the knowledge of God.”

Working out the implications of Paul’s exhortation, John Frame offers his new textbook. It is a massive book, packed with schematic outlines, diagrams, study questions, lists of terms, “famous quotes,” and recommended readings. It draws heavily from his previous publications and gathers decades of accumulated resources from his experience as a teacher, writer, and debater. This is not a book for the fainthearted or the dabbler.

In the spirit of Abraham Kuyper and Cornelius Van Til, Frame excludes “religious neutrality,” opposes the quest for autonomous human reason, and affirms “worldview” and presuppositions as the best way to understand the history of philosophy and theology in the West. By his own admission, Frame tells a dramatic story punctuated by one convulsion after another. His purpose goes beyond description and analysis to embrace advocacy. “I have tried to write this book,” he stresses, “so that readers can see that a biblical philosophy and theology can prevail against even the most intelligent among its detractors.”

Frame’s presuppositions hold this book together: a Christian worldview exists; “working assumptions” are unavoidable; the Bible is applicable to “every aspect of human life”; believers confront an antithesis with unbelievers “in every area of life”; there is little difference between theology and philosophy; and the “history of philosophy” tells the story of “one phase of spiritual warfare.” Indeed, despite the book’s title, Frame offers not so much a history as “an extended apologetic.”

The reader should keep in mind not only Frame’s presuppositions but also the more fundamental question of how Christ enacts his lordship over life. Our Savior rules his church as mediator, shepherd, husband, brother, friend. He loves his Bride. He died for her. He nourishes and cherishes her. None of this can be said of Christ’s rule over creation and his sovereignty over human society and culture. The distinction is fundamental in Scripture and ought therefore to shape how (and to what degree) believers seek to conform the world to a biblical standard.

Frame takes it for granted that “worldview” is a durable, if not permanent, concept. This assumption seems unwarranted. Worldview is itself a product of modern philosophy—of Hegel’s idealism, to be precise. Frame doesn’t see an antithesis between worldview and Christianity. But that tension needs to be explored. Worldview as a concept may not even survive the passing of the modern age. If not, then Christians need to be equipped for life after worldview.

Given the degree to which Christian education at every level in the United States has been built on the premise of worldview, it would seem incumbent on teachers to move beyond what Frame defends and combats with this arsenal and ask a hard question: is a defense of worldview inherently and inescapably a defense of modernity? It would take a whole book to answer that question.

Nevertheless, Frame sees a bright future for a renewed Christian philosophy. “God has not abandoned the world of thought,” he writes. Indeed. Christians are called now as always to submit to the doctrine of Christ under the guidance of the Holy Spirit through the ministry of the Word.