Enlisting Faith: How the Military Chaplaincy Shaped Religion and State in Modern America 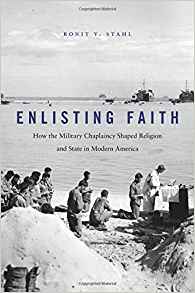 Enlisting Faith: How the Military Chaplaincy Shaped Religion and State in Modern America

Dr. Ronit Stahl, a historian and professor at University of California-Berkeley, describes her book Enlisting Faith as “a history of religion, the state, and society from World War I through the 1980s” (7). Her conviction is that “the story of the modern American military chaplaincy unmasks the bidirectional influence of religion and state,” and her purpose in writing is to “demonstrate how a state institution worked hard—sometimes succeeding and sometimes failing—to build a religiously diverse and pluralist nation” (6).

Stahl supports her thesis with three main points. First, “Over the twentieth century … the military served as a crucible for religious change” (4). Second, “the chaplaincy unveils the processes of state regulation in … religion” (4). Third, “an account of the chaplaincy makes American trials of faith visible” (5). She concludes: “Braided together, these stories of religious encounter, the regulatory state, and the trials of faith, underscore the centrality of religion in modern America” (5).

Stahl argues that several formidable forces drove the military to serve as a crucible for religious change from World War I to the 1980s. During the first half of the twentieth century, progressive and patriotic political influences in the military led to a tri-faith chaplaincy (Protestant, Catholic, and Jewish) (44). During the 70s and 80s, “Chaplain Corps further diversified in three ways: by recruiting racial minorities, assenting to the inclusion of women, and addressing the needs of more varied faiths” (228).

Stahl’s passing reference to tensions between theological conservatism and liberalism in American Protestant denominations implies that theological liberalism played a role in the emergence of this tri-faith moral monotheism in the military. As a result, chaplains “could evangelize only religion in general, offering nondenominational spiritual succor that transcended sectarian differences” (48). However, racial integration, anti-nuclear opposition, and anti-Vietnam War opposition challenged this status quo and contributed to an increasing inclusivism in the US military chaplaincy and, thereby, in America. Stahl discusses how the 1984 landmark federal district court case Katcoff v. Marsh (summary judgment, affirmed on appeal), which upheld the constitutionality of the chaplaincy program, contributed to the transition from three major faith groups to numerous “distinctive faith groups” (247–48, 250).

Stahl argues that these intentional, emerging military policies led, in order, from a tri-faith moral monotheism, to a military-spiritual complex characterized by pragmatic pluralism, to finally an increasing inclusivism.

This emergence of denominational diversity in the military chaplaincies today facilitates our own OPC chaplains’ opportunities to preach biblically and confessionally Reformed historic Christianity.

Stahl’s views may not find a home in the minds of all those who read Enlisting Faith. But her book should move readers to respond critically and constructively to the history she presents, to the arguments she marshals, and to the conclusions she reaches about how the US military chaplaincy influenced religion in twentieth-century America.